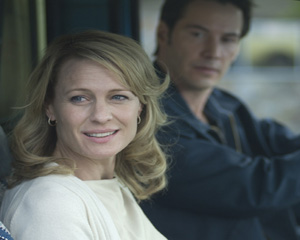 How many lives does one person squeeze into a single lifetime? That’s the question asked in The Private Lives of Pippa Lee, a new film written and directed by Rebecca Miller. Based on her own novel, the film follows Pippa Lee across the transom of her life, beginning with a turbulent childhood in seemingly perfect suburbia, into her wild, freewheeling teenage days, a subsequent marriage to a man 30 years her senior, children, wifedom and perfection, until she finds herself back in seemingly perfect suburbia in the midst of a meltdown.

Miller spent almost a decade haunted by the idea of Pippa. Even while she was making earlier films Personal Velocity and The Ballad of Jack and Rose, she felt the weight of Pippa’s story heavy on her mind. She thought the purging process of writing a book would exorcise those ghosts, but even after the novel was finished, she says she was still hungry.

“I wanted to know more,” she says. “I wanted to see these characters interpreted by actors.”

Asked what inspired her obsessive desire to investigate this story, Miller’s lips curl into a smile as she recalls the first moments the idea struck her.

“I was meeting someone I hadn’t seen in years who was a really wild girl in New York when I knew her,” Miller begins. “Twenty years later, she was the mother to a couple of kids, married, she’d really cleaned up her act in a big way, and I thought, how did she do that? How did she make this transition? And how many other people are like that? How many women am I looking at and judging in a certain way when meanwhile they have a past that doesn’t match their present at all? I began to realize there are quite a lot of those people. We have many lives within us.”

Robin Wright, who stars as the older Pippa, saw the story as analogous to the evolution of life everyone goes through and was fascinated by the idea of unveiling the many different people we become as we age.

“Twenty to 30, 30 to 40; they are truly different lives,” Wright says emphatically. “And the self-reflection that comes with those lives?” she lets out a puff of breath and shakes her head, too overwhelmed by the enormity of the subject to even breach it, though Miller is quick to continue the idea.

“What’s identity? What’s character? Once you reach a certain point, especially in your 30s and 40s, you don’t even recognize your younger self,” the director adds. “There are things you did that you’re not even capable of imagining yourself doing anymore.”

In order to bridge the chasm between some of the many lives Pippa leads, Miller cast both Wright and “Gossip Girl” star Blake Lively to play the part at different stages in her life.

“I thought one of the things that was interesting is that they’re two people and, in your mind, you’re joining them together,” Miller says. “Part of the point is that you look back on yourself, and you almost seem like a different person.”

But they couldn’t be too different. Before filming began, Wright and Lively had to participate in pre-production camera tests. It was the perfect opportunity for Wright to study the young actress and see what she could use to build the other side of their performance.

“Rebecca said, ‘Just go find something,’” Wright recalls with a grin. “She said, ‘Just observe and pick something she does that you can mimic so we can see the through-line that this is the same person.’”

Immediately Wright noticed a mannerism that became key to building the character.

“Blake does this thing, she’s such a pure innocent, when Rebecca would talk to her, Blake would go ‘What?’ and she’d just lift these doe eyes. You just want to hug her! Everything that came her way was taken with a fresh embrace, no judgment, and it was always a surprise. She would go, ‘Wow. OK.’ So Pippa became that woman where you just have to say ‘OK.’ Everything had to be OK.”

But what happens when things aren’t OK? When your world falls apart and you don’t recognize the person staring back at you in the mirror anymore?

And it doesn’t matter how many lifetimes it takes to do it.