The Road: A Father and Son Love Story 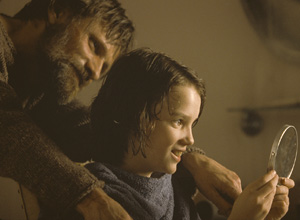 When it comes to film pedigrees, The Road has one of the best to come down the pike in years. Backed by the Weinstein Company, legendary for their Oscar campaigns; produced by Nick Wechsler, whose vision brought such indie classics as sex, lies, and videotape, Requiem for a Dream and Drugstore Cowboy to fruition; starring Academy Award nominee Viggo Mortensen, with a supporting cast of Oscar winners Charlize Theron and Robert Duvall and based on Cormac McCarthy’s Pulitzer Prize-winning novel of the same name, there was never any doubt this film would be one of the biggest dramas to hit screens in 2009.

The Road is set in a post-apocalyptic world. Ten years ago a mysterious flash of light created a cataclysmic event that rendered the earth without energy, power, vegetation and food. What is left is a long, lonely, treacherous road.

As ash and snow flutter down from the sky, the Man (Mortensen) and the Boy (newcomer Kodi Smit-McPhee who, like Lukas Haas in Witness and Haley Joel Osment in The Sixth Sense, gives an uncanny performance that is among the best a young talent has ever cultivated) trudge along in hopes of finding food, water, shelter and other survivors. With their precious last few possessions hauled along in a shopping cart outfitted with a bicycle mirror so they can see who’s coming up behind them, they march toward the ocean on a barren, lifeless path, searching for sanctuary, all the while clinging to each other and the love that is keeping them alive.

Director John Hillcoat explains that his involvement in the film came out of a conversation with Wechsler about their shared love of author Cormac McCarthy’s work. Wechsler failed to secure the rights to No Country for Old Men but begged McCarthy to bring him anything else the author wanted to see turned into a film. Soon, an unpublished manuscript of The Road was sitting on Wechsler’s desk.

While many other studios believed the story was too doomed to connect with audiences, and even publishers were telling McCarthy that he’d gone too far, Wechsler and Hillcoat were both smitten with the material.

“It just hit me like a freight train and I couldn’t get it out of my head,” Hillcoat says. “Still haven’t.”

Their passion for the project got it moving into the pre-production phase and soon The Road was receiving tremendous accolades and selling millions of copies.

“We all loved it and then other people had a similar reaction to it,” Hillcoat says simply. Despite the story’s incredibly bleak tone, the director explains, “It’s not about that. It’s a book about human goodness.”

Mortensen was also touched by the heart of this tragic tale. He believes that both the film and the book teach a valuable lesson.

“No matter how dire the circumstances might be; be loving,” Mortensen says with quiet earnestness. “Just because it’s the right thing. What the movie teaches is that it’s worthwhile to treat other people and yourself kindly. It’s a simple idea, but then you realize it’s a hard thing to do. In a profound way, you understand that it’s always better, always, to be nice.”

The actor, like Wechsler and Hillcoat, was instantly struck by the gravity of McCarthy’s story and enraptured with the material. He read both the script and the book in one day, an experience that rendered him emotionally spent but “I thought, wow, this is a great script. Tough story, but strangely kind of uplifting at the end,” Mortensen smiles. “I went through a lot reading the script. I couldn’t believe how much emotion was condensed into it.”

Everyone involved deeply connected to the tremendous love between the father and son, a storyline McCarthy drew from his own life.

Director Hillcoat describes a moment of revelation when the author and his young son visited the set.

“[Cormac and his son] came to set, and you see that his son is the Boy. He introduced him as, ‘John, co-author of The Road.’ Then you realize, that’s what it’s really about; his relationship with [his child]. If you look at films, where do you see love stories with fathers and sons? It’s usually tyrannical fathers or absent fathers? The Boy saves the Man. He’s the moral compass. It’s the most moving story about human goodness that I’ve ever come across.”

The Road releases in theaters Nov. 25.