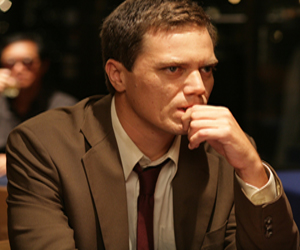 Lately, the film noir genre has been hinted at but never completely encapsulated by a filmmaker working in this era of cinema. Recent films like Brick and The Salton Sea tried to bring back the genre that was so popular in the early ’40s through the late ’50s, but both only pay their respects to a culture so poignantly represented by the cynical attitudes of a society fighting war, suspicion and the menacing onset of sexuality.

From writer/director Noah Buschel comes The Missing Person, the story of John Rosow (Oscar nominee Michael Shannon), a private detective hired to tail someone who appears to be a runaway, Harold Fullmer (Frank Wood). Rosow takes a train from Chicago to Los Angeles with his target, who is accompanied by a young boy. Once in the City of Angels, the detective has several bizarre encounters with absurd characters: a cop on a Segway, disruptive FBI agents and the film noir’s typical femme fatale.

He continues to follow the pair to the Mexican border. Rosow learns that Harold is actually bringing children in distress to the safe haven south of the border.

The man employing Rosow offers him half a million dollars to return Harold to his wife in NYC. The detective realizes that Harold is one of thousands presumed dead after the 9/11 terrorist attacks in New York City.

The Missing Person is the most aptly developed film noir I have seen this decade. I adored Brick, but Buschel has a way of setting the mood through character development and action that adroitly builds a parallel world, one that is not present-day, nor present-decade.

Instead, suspicion, desperation and separation are prevalent throughout the piece of noir magic that reminds us why our generation doesn’t really know it all. We are just as lost as those who came before us, and no one can figure it all out by himself.