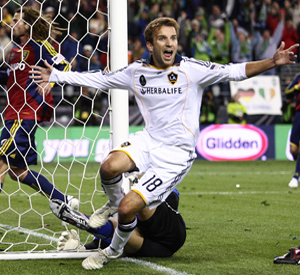 David Beckham and the Galaxy had a remarkable chance to capture the MLS Cup title for the city of Los Angeles, but underdog Real Salt Lake ruined that opportunity. Los Angeles’ effort came slightly short in front of 46,011 fans in attendance.

Real Salt Lake defeated the Galaxy in penalty kicks by a score of 5-4 in Seattle Sunday to earn their first ever Major League Soccer championship. After the first 90 minutes of playing time and two overtime halves, the match remained knotted at one goal apiece. It wasn’t until the PKs that the affair was decided.

Forward Mike Magee gave Los Angeles a 1-0 advantage in the 41st minute after a Landon Donovan cross. Magee connected to the far post for the score. Real Salt Lake responded in the 64th minute when striker Robbie Findley netted a left-footed shot into the net off a rebound in the box.

Each team executed a total of seven penalty kick shots, with the Galaxy missing three and Real Salt Lake just two. This was the difference in who was crowned 2009 MLS Cup champions.