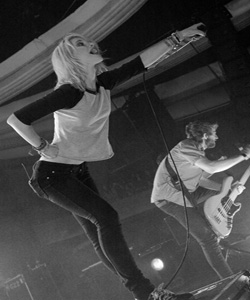 It’s been a good minute since the boys and girl of Paramore were last in Los Angeles, so a month delay from their originally scheduled appearance in October might understandably have fans pretty hungry. Luckily, the Tennessee natives weren’t about to disappoint.

Opening band Paper Route evoked such rock mainstays as Death Cab for Cutie and Augustana with their brand of artsy and progressive melodic rock, being emotive and raw while still feeling big and epic. The foursome, incidentally also from Tennessee, made the very large Palladium feel intimate on songs like “Are We All Forgotten” and “Carousel” from their debut album. Surely, this is a sign they’re capable of handling much larger venues in the near future.

Following Paper Route’s headliner-worthy set, Paramore took the stage to reclaim their stake as the head band of this scene. After starting with a spacey, mostly instrumental solo, the band launched full steam into new single “Ignorance.” And with the flip of a switch, frontwoman Hayley Williams went from insular jam band participant to frenzied punk rock princess.

Though the set list favored their new album, Brand New Eyes, much of the band’s magic still lies in the favorites from previous records. Williams’ delicate crooning on the acoustic “Misguided Ghosts” showed an endearing vulnerability, but it was older songs “Conspiracy,” “Emergency” and “Crushcrushcrush” that saw her at her most charming and ultimately relatable. Closing their set with “Decode,” however, Williams and her band mates commanded the stage like seasoned pros, showing more experience than their ages would ever suggest as well as Williams’ unparalleled vocal range.

So, maybe the new songs still need time to grow in a live setting, Paramore has at least proven they’re worth the wait in the meantime.