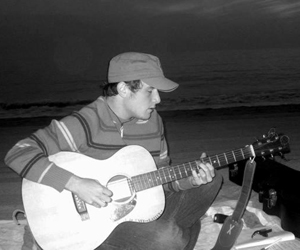 Sometimes you just don’t want to hear the same screaming infidelities and lonesome melodies of unrequited love and heartbreak. Yet, though the same “you broke my heart” love song formula may seem tired, there is something different when the voice behind the music invites you to see where he’s coming from.

The intimate acoustic gathering of Jason Reeves at the Hotel Café showcased the musician’s heritage for backcountry creeks and lonesome heartaches. Slow acoustic melodies with subtle bass and cajon accompaniments had the entire audience mesmerized and lovers holding tight.

Simply and slowly, Reeves sang each song with his eyes held shut, letting the words spill forth from his gut. The show itself kept the same somber tone throughout with some lighthearted moments from a couple offbeat remarks in between sets and improvisational lyrics.

In songs such as “Gasoline,” the singer even adlibbed some profanity against the woman who caused him such heartache. It was funny, it was appropriate and the audience loved it.

Highlights of the show included surprise collaborations from locals in the audience. The sheer force of their voices and Reeves on the guitar showcased the singer-songwriter as more than just a broken heart. Instead of wanting to console him, you felt more like singing along.