OC Fairgrounds Sale: Nothing Fair About It 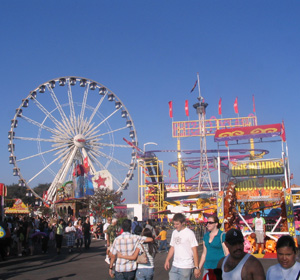 The OC Fairgrounds is the home of the annual Orange County Fair.
(Credit: Kafziel, wikimedia.org)

The economy is undoubtedly a hot button topic right now. It’s affecting everyone, and combined with issues of balancing California’s annual budget (again), the state is staring at an estimated $21 billion deficit over the next year and a half for the second year in a row.

The state college fee hikes and budget cuts that so incensed UCLA’s student body aren’t the only ways Governor Schwarzenegger has come up with to help balance California’s checkbooks. In what seems to be desperation, our beloved (Yes, I use that term loosely.) Governator proposed selling off California’s public landmarks to turn a profit.

His plans were originally announced back in May, and while nearly all of the properties on the original list have since been cut out of the plan (His idea to sell the property beneath San Quentin State Prison, for example, has been pitched and vetoed for the past four years. 2009 is no exception.), there is one property that is close to many SoCal local hearts that is definitely being sold: the Orange County Fairgrounds.

For many locals, the fairgrounds are the home of Saturday swap meets, and residents from all over Southern California have fond memories of the festival that has been a summer event staple for the community. Even so, in July, an amendment to an assembly bill was passed that set up terms for a public bidding process for private ownership and the property was officially (but covertly) put up for auction on Oct. 5 to “no public opposition.”

Now, none of this would be of too much concern to the residents of Orange County or regular fair-goers, except for a line in the amendment that states that the auction “is designed to obtain the highest and most certain return for the state.” Which means that the land certainly won’t go to a public group who’s looking to maintain the history or accessibility of the fairgrounds, or is necessarily looking out for the best interests of the community (apart from profit, of course).

But since it’s up for public auction, many residents fear the worst. The property could go the way of the South Central Farm and get bought up only to turn into a warehouse and distribution center, or be developed into housing or yet another strip mall. Because we all know the one thing Southern California needs is another strip mall.

And the sale looks all the more fishy because a private nonprofit foundation made up of current, Schwarzenegger-appointed Orange County Fair Board members was formed to purchase the property and speed the sale. There has been controversy surrounding the board’s spending habits in the past, with exposés reported by the Orange County Register and the county’s political blog, Orange Juice.

But the operative word for the new foundation is “private,” and its members are rather secretive about the group’s formation, motives and financial resources. Adding suspicion to secrecy, questions regarding the legality of the board’s activities in lobbying to push the sale forward have been posed in the last month.

Costa Mesa locals held a town hall meeting on Nov. 18 to discuss the sale and to voice opinions and representatives for the Fair Board were suspiciously absent to answer questions. So while this whole debacle is looking more curious, Orange Country locals concerned with preserving the fairgrounds have resolved to write the governor as their first line of attack. In the mean time, the city has already had zoning restrictions in place on the land, which limits its use to “institutional or recreational” use.

For the moment, the city has no intention of changing the zoning laws, but this could be a major Catch-22 for the proponents of the fairgrounds. On the one hand, keeping the zoning laws intact would mean limiting the development potential of the property and make the property less desirable to commercial interests, but this could also drive down the estimated value of the property, making it easier for the Fair Board to buy the property on the lower end of the estimated $90 to $180 million price tag. And how is that supposed to help stave off the budget crisis?

So what’s the board’s real motive behind privatizing the fair? Many locals speculate that the board wants to own the fair outright in order to hire non-union employees and drive their own profits up, as well as bulldoze the Equestrian Center, which, while popular, makes little money. Furthermore, the board will be able to cut out the public process that lets Costa Mesa locals weigh in on what’s going on in their backyards.

So while Orange County residents continue to write letters, the auction is slated to end on Jan. 8, with the sale to be complete as soon as one week after that.