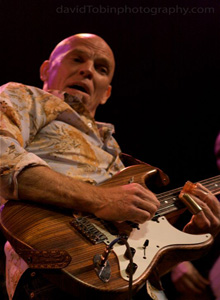 Kirby Kelly is King of the Blues!
(Credit: David Tobin)

King of the Blues

Ranging in age from 18 to 50, the finalists in the 2009 Guitar Center King of the Blues competition offered a full range of the blues at the House of Blues Sunset Strip Nov. 12.

Josh Gooch kicked things off with his slide attack, followed by Roosevelt Collier and his steel pedal soul. Next up was Graham Whitford, son of Aerosmith guitarist Brad, and Dan Peters slingin’ his guitar over his head for a full verse of his shuffle solo.

But it was 50-year-old Kirby Kelly who took top honors. With the pain of Texas in his heart, it was clear his blues were well earned. To help celebrate, Joe Bonamassa took the stage and jammed with all the judges, including Steve Lukather of Toto, blues icon Hubert Sumlin and Elliot Easton of the Cars. —David Tobin

Comedian/actor/author/Pudding Pops salesman Bill Cosby has produced and released a hip-hop album called Bill Cosby Presents the Cosnarati: State of Emergency. Cosby used a trio of young rappers – Jace the Great, Brother Hahz and Super Nova Slom – in the making of the socially conscious album that addresses such themes as self-respect, peer pressure, abuse and education through frank and insightful lyrics.

Cosby says he has two goals for State of Emergency: to bridge the generation gap and to empower listeners to take action rather than to continue to sit back. The album is available digitally at Amazon.com.

Ten Out Of Tenn Celebrate Christmas

The Nashville-based singer-songwriter collective known as Ten Out Of Tenn has released a Christmas album cleverly entitled Christmas. The set features well-known chestnuts like “O Holy Night” and “Little Drummer Boy” performed by Griffin House and Erin McCarley respectively along with original recordings like KS Rhoads’ “Why Are Mom & Daddy Fighting on Christmas?”

Trevor “T-Bone” Peres, guitarist for long-running Florida death metal band Obituary, recently launched his own barbecue sauce line. T-Bone’s Famous Original Riblicious Bar B Que Sauce is said to have a tangy flavor with a blend of mild spices and a hint of hickory smoke.

Peres will be adding spicy rib rub, sweet chicken rub and spicy hot barbeque sauce to his T-Bone line in the near future. You can order sauce and find recipes at tbonesfamous.com.

Mike Williams, vocalist for Eyehategod, Outlaw Order and Arson Anthem has released a new spoken word piece called “That’s What the Obituary Said.” The “anti-social misanthropic” prose piece features ambient backing by Ryan McKern of the Guilt Of… and takes up one side of a limited edition seven-inch single. The other side features Williams singing on a newly remixed version of Bloodyminded’s “Ten Suicides.”

Williams, who is also the author of the delightfully titled Cancer As a Social Activity: Affirmations of World’s End created the artwork for a special poster that comes with the equally unique black-with-yellow-splatter colored vinyl. Find it at chromepeeler.com.

Tom Waits’ Orphans: Brawlers, Bawlers and Bastards, an odds-and-ends collection previously available only as a three-CD set will be released on vinyl by ANTI- Dec. 1. Waits fans will be pleased to hear that the set contains six bonus tracks not available on the CDs, including two newly recorded songs.

Jerry Fuchs, drummer for the Juan MacLean, has died. The Georgia-born musician fell to his death in a Brooklyn elevator shaft Nov. 8 after attempting to jump from the car of a freight elevator that was stuck between floors.

Fuchs was a drummer in great demand, also working with Holy Ghost!, Maserati, !!! and Turing Machine, and he also worked as a graphic designer for publications like Chunklet and Entertainment Weekly. Fuchs can be heard on the just-released Happy House 2 X 12 remix collection from the Juan MacLean and seen on a 20-minute live version of the video for “Happy House” that’s posted at vimeo.com.