The Stooges: The Authorized and Illustrated Story 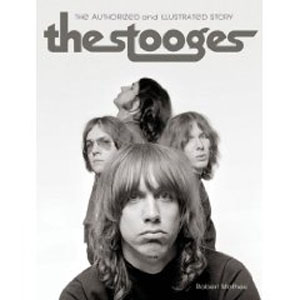 It’d be tempting to call this Stooges biography a collection that smells of ’70s rock criticism (see: references to The Igg, ...that old Bowie magic was on the case like speed on Lou Reed and, of course, The Stooges will live on.).

But the writing isn’t the thing – a compilation of photographs spanning 40 years of the Stooges, and essays written by a variety of writers, The Stooges is a decent effort for its energy, enthusiasm and range of tidbits. For every bit of love spewed forth, as with Dave DiMartino’s analysis of Iggy Pop’s lyrics, the necessity of each crucial word on the band’s 1969 debut, there’s an odd piece of trivia to giggle at. Ron Asheton, as it turns out, sought official approval of the Stooges name from the Three Stooges over a conference call with Moe Howard in 1969, and told a SXSW panel audience in 2007, “We got the blessing of Moe Howard!”

And who knew that Iggy was an asthmatic? The book also addresses everything from Ron Asheton’s recent death to Iggy’s reworking of Raw Power, and is filled with gorgeous photography by Robert Matheu, among others, capturing the movement and excitement of a Stooges show. A perfectly timed release, as the Stooges have been nominated for the Rock and Roll Hall of Fame!

The Stooges: The Authorized and Illustrated Story is currently available.