The Velvet Underground: An Illustrated History of a Walk on the Wild Side 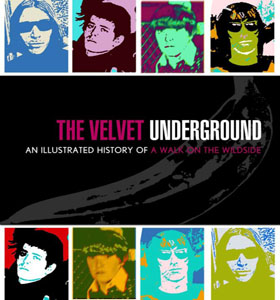 There are few more interestingly influential rock bands than the Velvet Underground, that seminal beat-but-not-really rock band managed by Andy Warhol who spawned the awesomeness that is Lou Reed and pioneered gender bending without all the obviousness of Bowie’s Ziggy Stardust. Now in the world’s first complete “illustrated history book,” The Velvet Underground: An Illustrated History of a Walk on the Wild Side, Jim DeRogatis chronicles the events that led to the formation of the band and traces their social impact through a collection of photos, loving (but delicately written) commentary, memoirs and interviews.

The book is loaded with tidbits about the band and brims with pages of glossy images in all their full-color glory, not to mention a complete discography, a list of every concert and rehearsal the band played and an archive of the band’s album covers. The book is visually impressive, as well as insightful, with a good balance of images and social analysis.

The Velvet Underground: A Walk On the Wild Side is currently available.