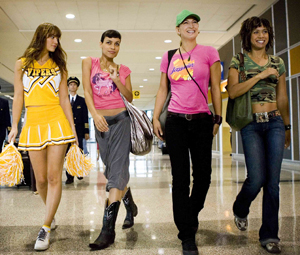 OK, crazy idea time. As a lover of film, I’m always trying to think up ways to innovate the art form. Like the stock market, art is a medium designed for taking risks. Big risks. Risks that could potentially be earth shattering if they were to fail. But hey, people don’t gamble for the money; they gamble for the thrill of possibly losing everything.

Sometimes I really feel sorry for the money people in the film business because it seems like they can’t afford to think outside the box like the creative people do. Anyway … on to my idea. In more recent years in the music business we’ve seen a lot of what I like to call the “team-up album,” where two like-minded musicians will record an album together and collaborate on every song.

This trend is more commonly found in hip-hop music. Some examples of this are Jay-Z and R. Kelly, Omarion and Bow Wow, Cee-Lo and Danger Mouse (Gnarls Barkley) and Madlib and MF DOOM. Why not take this structure and apply it to film?

Suppose for a minute that two like-minded directors who had creative chemistry teamed up to co-direct a project together – same characters, one story, but different parts of the same story. This could be done one of two ways. They could each direct one half of the movie, and when put together you get a story that’s divided into two interlocking parts of a whole. Even though the two sections would be about the same characters, they would be both symbiotic with and independent of each other. You could watch both or watch one and it would make sense. They could take place in different time periods or one could lead right into the other.

Take the sausage and pancake on a stick out of your mouth and picture this for a moment: Imagine a film about an up-and-coming young gangster in the 1930s, and Quentin Tarantino directs the first hour that chronicles his childhood and the defining moment that made him a criminal, planting the seed for the second hour that is directed by Martin Scorsese that chronicles the next defining moment of his adult life as the boy becomes a man and has to face his destiny.

If you can actually find some reason in your head why that wouldn’t be ridiculously awesome, you need to go look at yourself in the bathroom mirror and ... Imagine an Alien film where the first half is a suspenseful drama directed by Ridley Scott about how the aliens are introduced on to a group of people, and the second half is a wild, balls out action piece directed by his brother, Tony Scott, about how the surviving people fight and escape the aliens.

The second way you could do this is you could have each director direct his or her own feature length film and release both of them on the same day. Imagine Nora Ephron and Rob Reiner teaming up to do a romantic comedy where Ephron directs a film about the girl’s side while Reiner directs a film about the guy’s side. 2007’s Grindhouse was similar to this mold where Robert Rodriguez and Quentin Tarantino both directed trashy pulp movies and put them together as a double feature, and even though some aspects of the two films overlapped, they were essentially two different films.

Steven Spielberg and Peter Jackson are doing something similar right now with Tintin, where Spielberg directed one and Jackson is going to direct the next one, but they still have to wait and see if the first one is successful to do the second one.

I’m saying make both films at the same time about different aspects of the same characters and release them both on the same day. Any way you look at it, art is meant to be innovated, and the current configuration of the movie business is going to run out of steam eventually. Ultimately, it behooves the money people to follow the creative peoples’ lead because if they don’t, they won’t have anything fresh to slap on the front of a happy meal and peddle to kids 20 years from now.