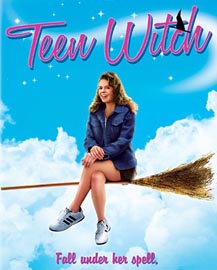 Sure, it’s not a classic – and maybe not even a cult classic, like the Nuart Theater’s usual Fridays-at-midnight fare. Nevertheless, Teen Witch – Dorian Walker’s bubbly 1989 film – is a lot of fluffy fun that’s worth at least one look.

The film stars Robyn Lively (television’s short-lived series "Savannah") as Louise Miller, a not-so-popular high school student who wears the most un-trendy clothes possible and who’s the butt of almost all other students’ jokes. Things begin to turn around, though, when Louise – with the help of a local tarot card reader played by Poltergeist’s Zelda Rubinstein – learns that she’s a descendant of the famed Salem witches. With a flurry of powers available for the taking, Louise begins to change her everyday experiences. She goes from everyday underdog to belle of the ball, turning her humdrum existence into one filled with golden popularity, an endless supply of designer-inspired duds and the attention of a very special guy.

Teen Witch also stars Dan Gauthier (Jennifer Aniston’s crush, "Chip," on a couple of "Friends" episodes) and Dick Sargent (the second Darrin on television’s "Bewitched"). It is, when all summed up, a great selection for a Friday midnight movie – it’s an ugly duckling tale packed with loads of wit, laughs and sweet harmless fun.

For ticket information and more details about the "Friday Midnights at the Nuart" series, visit www.landmarktheatres.com.