Fight On?: It's All Relative! 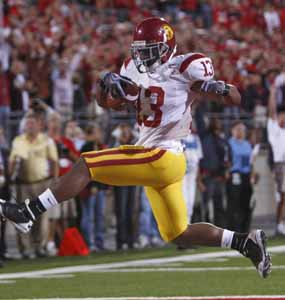 As the Trojans and Bruins prepare to take the field in battle this weekend at the Los Angeles Memorial Coliseum, both USC and UCLA serve as perfect examples of how differing expectations influence each respective team’s definition of “success” or “failure.” While many teams will gladly accept the prospect of a 9-3 season, USC is in panic mode. (Across town, the Bruins are in celebratory mode after defeating Arizona State Nov. 21, making UCLA bowl game-eligible).

Sure, a 9-3 record would have been respectable in the years before Pete Carroll came to USC, but the seven consecutive Pac-10 titles, five Rose Bowl appearances, two national championships, a 6-2 bowl game record, a 14-4 record against teams ranked in the AP Top 10 and an overall record of 95-18 during his tenure has definitely raised expectations. With such a track record, failure is no longer an option for USC football.

Long forgotten was the 37-35 record between 1996 and 2001, under Carroll’s clock, it became National Champs or nothing.

Then 2009 happened. No playing in the BCS National Championship Game. No “settling” for the Rose Bowl. Suddenly, Trojan fans are reaching for the panic button after falling to 7-3 heading into this weekend’s Battle for the Victory Bell.

With USC chalking up 2009 as a “failed” season, this weekend’s game against UCLA promises to be a true watershed of the relativity of defining “success.” At 6-5, the Bruins are not looking at 2009 as a failure. Heck, with possible victories over USC and their yet-to-be-determined bowl game opponent, UCLA will be tickled fancy with “success” this season – even with a losing record in Pac-10 play!

All the while, USC is not playing for a national championship, and that is not good for Trojan lovers. And who can argue, what with USC winning 11 national titles (most all-time) and, until this season, claiming seven consecutive 11-win seasons, seven consecutive finishes in the top four spots of the much-heralded AP Poll (all Division I-A records), seven straight Pac-10 conference championships (a league record) and three straight Rose Bowl wins (all-time record). Alas, all good things must come to an end, and all of these streaks have found their end in 2009.

So, that begs the question: Heading into this week’s game against UCLA, how did USC go from a No. 4 ranking in the opener against San Jose State to staring down a potential 7-5 record?

Some may be quick to blame Carroll’s decision to start a true freshman (Matt Barkley) at quarterback. Others may argue that the freak injury halfback Stafon Johnson suffered in the weight room in September was a severe blow to the Trojans’ red-zone offense. Even still, there are those who will say that the Trojan offense lost three great coaching minds in Norm Chow, Lane Kiffin and Steve Sarkisian.

Yet, the ultimate culprit of the “failed” 2009 season is the USC defense. Clearly, a team that has given up 217 points through just 10 games will have issues, especially when that total is over 100 more allowed than all of last season.

At its current pace, the Trojan defense will trail the 2005 team, which allowed 297 points, as the most porous since Carroll arrived in Los Angeles. In the past five games alone, the Trojans have allowed 27, 36, 47, 9 and 55, respectively. The 55 points allowed to Stanford Nov. 14 was the most given up by a Trojan defense ever, while the nine points allowed came against a weak Arizona State team.

Worst yet, USC combined its poor defense with a sputtering offense that scored just 20, 14 and 21 points, respectively, in the last three games.

All this bodes well for UCLA, who are definitely seeking to exploit USC’s defense, run up the scoreboard and, in the process, make life even more miserable for the Trojans with a victory at the Coliseum. Should UCLA humiliate USC on its home turf on Saturday (and if the Trojans lose Dec. 5 against Arizona), both the Trojans and Bruins will head into their respective bowl games with seven wins. For one school, ultimate bliss, and the other, utter humiliation. It could be Albert Einstein’s Theory of Relativity placed on perfect display this weekend at the Coliseum.