Lakers' Bench Is The Discussion 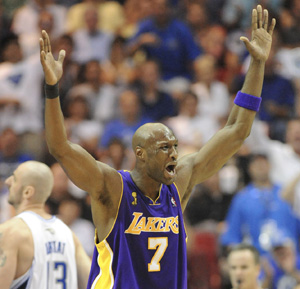 Lamar Odom could easily be the sixth man of the year this season.
(Credit: Paul Rodriguez/Orange County Register/MCT)

The Los Angeles Lakers are arguably the preeminent team in the NBA. They unarguably have the best starting five. However, every unit has its woes. For now, the purple and gold should be concerned about their bench, at least to some degree.

Head coach Phil Jackson does not appear to be concerned, at least for now. Lamar Odom, Shannon Brown, Sasha Vujacic and Jordan Farmar are some of the players coming off the bench. Jackson made references to two crucial ones with integral roles (Odom and Vujacic).

Odom is the one who will receive the most playing time coming off the bench, and the rest will follow. He could easily be the sixth man of the year for this current campaign, but it is a rather difficult task because of the talent around the squad; there are multiple individuals who are simply scorers, and his scoring opportunities are thus limited. Odom is the most versatile player for the Lakers due to his easiness to play all five positions convincingly. He can score, dish dimes, block shots and rebound aggressively almost to perfection on both ends of the floor.

Jackson believes it is just a matter of time when Odom will be a true spark off the bench.

“He’ll find his way. He had 12 rebounds tonight. That part of his game was good. He had five assists, which is OK,” Jackson said after the Lakers 100-90 victory over the Knicks Nov. 24.

Jackson went on to state that Odom was slow to adapt last year as a bench player. Currently, Odom is averaging 9.1 points, 8.7 rebounds and 4.8 assists. He could only get better as the season continues.

Vujacic, on the other hand, is a true shooter who can drop three-pointers, long perimeter two-point attempts, pull defenders out of the paint to protect the line behind the arc and be an annoying defender to opponents. Thus far this season, Vujacic has been subpar and is not getting as much playing time as he has before. His role is yet to be determined this year.

The Lakers are the defending NBA champions. After their loss at Staples Center, Knicks head coach Mike D’Antoni highlighted this fact.

“It’s hard to play against a team with three seven-footers,” he said. “They’re a really good team. Until someone says something different, they’re the champs.”

Knicks rising star David Lee, who is averaging 17.2 points and 9.7 rebounds per game, concurs with D’Antoni.

The Lakers have the best player in Kobe Bryant (His 30.1 points per game leads the NBA.), three powerful seven-footers and Odom coming off the bench. Odom could be starting on any other squad.

The Lakers also have the best coach and a lot of depth. The only dilemma for now is their bench and its trouble maintaining the team’s big leads.

This was evident when the Lakers hosted the Knicks Nov. 24. Los Angeles had a vigorous third quarter in which they outscored the visitors 28-17 to open up an 83-62 comfortable advantage going into the last quarter of play.

Jackson pointed out that the large edge was relinquished partly because of the lack of leadership on the floor. That is true, but it was sloppy basketball for about six-to-seven minutes in the fourth quarter.

Jackson had a perplexed look on his face as he entered the post-game press conference. He simply did not know what to say about the game in terms of his opening statement. Is this a cause for concern on his bench status? Probably so, but not as much as other teams would perhaps see it as such.

“Right now, they are just filling in minutes for guys that are getting rest on the bench,” Jackson said. “We’ve got to have better than that.”

In the end, Jackson trusts his team and believes it can only improve on its current flaws: the bench holding the big leads.

“We have to do a good job on finishing up games,” Lakers forward Pau Gasol said. “We work so hard to get 20-25-30 point leads and blow them out in the end, but then we lose them in the fourth quarter.”

The Lakers host Miami Friday and Phoenix Sunday – two games that will test the mettle of the entire team.