Forever the Sickest Kids: Living for Their Weekend 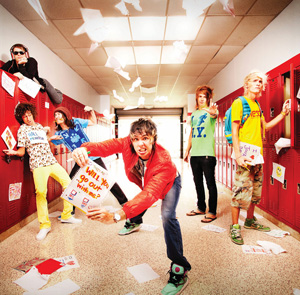 Now, based on what you’ve gathered and assumed, you might be surprised to hear whom they name-check on their latest EP, The Weekend: Friday. No, not the rock icons of decades past; Not even the current scene kings of the dance-flavored punk circles they frequent.

Jay-Z and Soulja Boy. No, really.

But they’re not a joke band. No, really.

For Friday, the first installment of a three-part EP release, the Dallas natives are true to synth-rock form with their signature brand of infectious pop jams. But that doesn’t mean the EP won’t still challenge listeners’ expectations, either.

The aforementioned references happen on the track “Hip Hop Chick,” amid a first-person play-by-play of finding love in the least likely of places – while maybe being slightly intoxicated. Though they might seem out of their element in any establishment that catered to fans of the musicians they reference in the song, keyboardist Kent Garrison assures that his band actually had some real life experience to draw upon for inspiration.

“Some of the guys in the band are really into hip-hop,” Garrison jokes. “One of them deejays, too, and started deejaying in some cities after shows, so we all have to go into the hip-hop scene. We thought it was a cool idea to write a song about a punk rock guy falling for a hip-hop girl, a girl that he wouldn’t normally go for. It’s just a fun song about opposites attracting.”

Without naming names, Garrison places himself as one of the less likely candidates as source material for the song.

“It’s not my genre of choice, but I definitely appreciate and respect good hip-hop,” he says with a laugh, adding that the most shocking artist to be found on his iPod is only Duran Duran.

“There were so many songs that we could’ve recorded for the first record, but we had to narrow down what we wanted it to be,” he says. “The writing process for this was pretty much the same. We just wanted a fun, poppy EP, and to have a lot of songs you could have fun singing along to.”

Friday also sets up the sonic transition into the band’s forthcoming Saturday and Sunday EPs.

“Saturday will definitely tie in well with Friday, it won’t be too different. It might be a little bit heavier, but with more of a dance beat to it. We’re really excited about where it’s going,” says Garrison. “We’ve also got a lot of ballad-type songs and acoustically driven songs that are more emotional and will probably end up making Sunday.”

Though their plan of releasing shorter recordings at more frequent intervals is an untraditional approach for bands, it was the only logical step for the Kids.

“It just feels natural for us to be releasing the way we are. We have so many songs written already, the easiest way to get more out faster is through the EPs, doing a three-part album rather than doing 14 songs and waiting two years to release the next 14,” says Garrison. “Hopefully we can keep a schedule where certain months out of the year we’ll always be recording and certain months we’ll always be touring.”

Would a joke band have that kind of foresight?

So don’t let the popular misconceptions about pop music or the dance-punk scene the band sprang from influence your opinion, these guys take their music seriously.

“We’ve always wanted to be a pop band. A lot of people give us crap about being too poppy, but that’s who we are. People are either going to love us or hate us, we know that. It’s just part of the job and something you’ve got to get used to,” says Garrison. “Every album tells a story. I’ve always felt really passionate about that, putting together a big project and letting the world hear it.”

The Weekend: Friday is currently available. Forever the Sickest Kids will perform Dec. 3 at the Avalon and Dec. 5 at House of Blues Anaheim. For more information, visit foreverthesickestkids.com.
Article posted on 11/30/2009
This article has been viewed 5161 times.