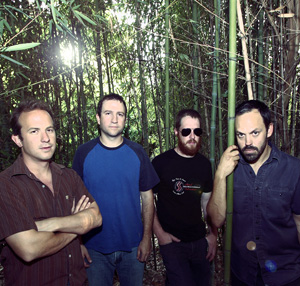 Playing off the title of the Rolling Stones album Tattoo You, Birmingham, Alabama’s Vulture Whale has named their new EP Bamboo You. The six-song set is an homage to British rock ’n’ roll and even goes so far as to have frontman Wes McDonald singing in a faux British accent throughout. The premise might sound cheesy but actually the idea works out nicely; find out for yourself by downloading Bamboo You for free through Vulture Whale’s MySpace page.

Idle Warship (Talib Kweli, Res & Graph Nobel) have teamed up with Mick Boogie to release a new 14-song mixtape called Party Robot. And to really get the party started the guys have decided that you can have Party Robot absolutely for free, explaining their decision thusly: “When we established Idle Warship we did it for us. Now that we’re giving you this music Idle Warship no longer belongs to us; it belongs to the world. We don’t believe in labels for music – labels may stop you from hearing something before you listen to it. We appreciate those who’ve taken this journey with us without judgment and enjoyed the ride. To everyone who purchased our music on iTunes and anyone who has bought a ticket to an Idle Warship show, this is for you. All my party robots stand up!”

Party Robot can be downloaded through Idle Warship’s MySpace page.

Write Me a Song, Eric

If you have an idea for a new song for Hutchinson just send your suggestion to myehutchsong@gmail.com, and maybe Eric will turn your thoughts into a big hit. You have a couple weeks to enter the “Inspire an Eric Hutchinson Song” contest; Hutchinson needs time to write the songs and make videos for them, which will then be posted at Erichutchinson.com on Dec. 7, 14 and 21. Sounds Like This Live 2 drops Dec. 15.

Former Beatle Ringo Starr has finished up a new album that he’s calling Y Not. Starr didn’t have to go very far to find a producer for the record as he decided for the first time ever to handle the duties himself. How did he come about the decision to become a producer after all these years?

“Well, I looked in the mirror,” the drummer says, “and I was looking real groovy that day.”

More seriously, Starr says that after cutting his solo albums with studio wizards like Richard Perry, Arif Mardin and Don Was, it was just something he felt it was time for him to try.

“It’s a confidence thing, I suppose,” says Starr. “I’ll be producing anything I make from now on. Y Not is really another way of me saying ‘Yes, I can.’”

Monsters of Folk – Conor Oberst, Jim James (or Yim Yames if you prefer), M. Ward and Mike Mogis – continue to promote their self-titled debut album through extensive video work. They just released a video for “Say Please,” a gorgeous bit of film shot by cinematographer Lance Acord, who is known for his work on films directed by Spike Jonze and Sofia Coppola.

Now the band wants you to make their next video by creating your own visual interpretation of their song “Dear God (Sincerely M.O.F.).” The contest winner gets $5,000, a Gibson guitar signed by the band and a copy of the new Final Cut Studio software. Five runners-up will take home a signed vinyl copy of Monsters of Folk. Find details on how to participate at Shangrilamusic.com/monstersoffolk/videocontest; you have until Jan. 1 to get your entry in.