Bowling for Soup: Sorry for Partyin' 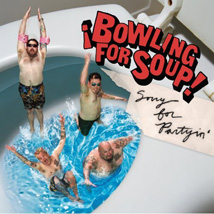 Who remembers that cute-but-ridiculous song “Girl All the Bad Guys Want?” Somehow, Bowling for Soup seemed to fade away after 2004, but now the band is back in all their surfer punk glory with Sorry for Partyin’.

Really, it’s got everything you’d expect from a band like BFS. The album’s opening track, “A Really Cool Dance Song,” is a catchy … well, dance song along the same lines as 2002’s “Punk Rock 101.”

There’s also “Hooray for Beer” and “No Hablo Inglés,” which are both funny, infectious and irreverent, and if you’re a guy with a best friend, you’ll definitely get “BFFF.” There’s also the high school senior anthem “Only Young,” and “If Only” rounds out the set list with a love song.

While most of their songs are fun (even if they’re less than surprising), the humor on “My Wena” falls flat. The joke here is so obvious that you overlook it, thinking that the guys from BFS are cleverer than that … right? But just say the title fast enough, and you’ll get it. No seriously, that’s the whole joke … I think.