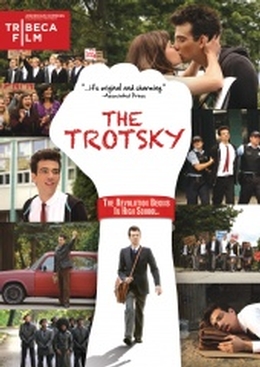 CAMPUS CIRCLE invites you to enter to win:

A DVD of THE TROTSKY from TRIBECA FILM and NEW VIDEO.

In this hilarious comedy, Leon Bronstein (Jay Baruchel, Tropic Thunder) is an unusually intense teenager who believes, with an incredible sense of purpose, that his name defines his destiny. Like his “namesake” Leon Trotsky, the celebrated Russian revolutionary and socialist theorist, Leon must do all he can--using his handy flash cards—to throw off the mantle of the rich and the privileged class. Also starring Geneviève Bujold, Anne-Marie Cadieux, Colm Feore, Emily Hampshire, Michael Murphy & Saul Rubinek.

Sweepstakes
This Sweepstakes is now closed.
Sweepstakes ends on 2/22/2011. All fields are required!  One entry per person.
Duplicates will be disqualified. Open to US Residents and Territories only.
This Sweepstakes page has been viewed 3,955 times.