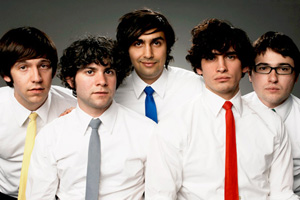 Those are things that make the Michigan-based band Tally Hall unique. With a quirky sound that completely defies categorization and rejects conventional labels, the quintet has been around since 2002, but with most tour dates on the East Coast and a record that dropped four years ago, the band has slipped out of the public eye to all but its most diehard fans.

With a crowd comprised mostly of young-un’s waiting to see Rooney, Tally Hall was up second at the El Rey on Black Friday showing some real signs of fatigue on stage. But considering they were finishing recording in the studio just the day before, the boys deserved some slack.

Even though their weariness did leave Tally Hall fumbling for words when talking to the crowd, the band still brought it once the music started. Vocalists Rob Cantor, Joe Hawley, Andrew Horowitz and Zubin Sedghi’s voices melded in perfect harmony through the set, backed by Ross Federman’s drumming.

The familiar old tracks (including “Welcome to Tally Hall” and the award-winning “Good Day”) had the newbies dancing in the pit and the fans singing along with their clever, sometimes nerdy lyrics and listening intently when the band played soon-to-be-released songs (“Sacred Beast,” “Cannibal”). When their set was due to close, the Hall gave the audience a choice between two songs to play last, and even though the general consensus was “Both!” the evening was rounded off with “The Whale, World and You.”

For a longtime fan, this band’s set ended way too early, but if the chanting of “Encore!” once the band left the stage was anything to go by, Tally Hall needs to come back to Los Angeles very soon … as a headliner.