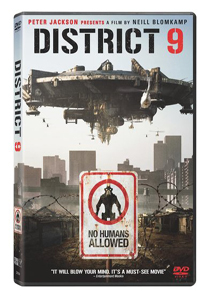 Action! The Little Action Film That Could, District 9, was the year’s surprise hit. Produced by Peter Jackson, the film is set in an alternate present where an alien ship has been stranded on Earth, its refugee inhabitants living in an apartheid-like slum. When a government agent is exposed to their biotechnology and becomes a human-alien hybrid, he takes up their cause.

The Collector: A David Copperfield for a new generation, Criss Angel is a master showman and illusionist whose show, “Mindfreak,” now comes in a 15-disc Collectors Edition Box Set. Angel performs amazing sleight of hand, metamorphosis, levitation and other illusions in public settings, as well as physical endurance type stunts, all with a rock ’n’ roll aesthetic.

Whether or not you dug Guy Ritchie’s update of the Great Detective, check out one of the best to don the cap and pipe, Peter Cushing, in The Sherlock Holmes Collection. Best known to younger audiences as Grand Moff Tarkin of Star Wars, Cushing first played Holmes in 1959’s The Hound of the Baskervilles. These five episodes of BBC’s 1960s Holmes series are the only that have survived. They include adaptations of Baskervilles, The Sign of the Four, The Blue Carbuncle, A Study in Scarlet and The Boscombe Valley Mystery.

The Horror! The Horror! The Blair Witch for the new millennium, Paranormal Activity was filmed over a week in the director’s house for $11,000. The film follows a couple that moves into a new home, which turns out to be haunted. Using night vision cameras, the couple attempts to discover their nightly visitor.

Not to be confused with Nine or The Nines, 9 is a visually stunning animated film set in a post-apocalyptic future. 9, a ragdoll, finds himself caught in a war between a community of ragdolls, known only by numbers, and evil machines. An all-star voice cast includes Christopher Plummer, Crispin Glover and John C. Reilly.

The Majors: Director David Yates returns to helm the penultimate adaptation in the Harry Potter franchise, The Half-Blood Prince, an improvement over his last effort in The Order of the Phoenix. Harry finds a mysterious tome, meanwhile taking private lessons from Dumbledore to learn more of nemesis Voldemort’s dark past and uncover a possible weakness.

The Sporting Life: Joe Frazier and George Foreman are among the boxing legends that pay tribute to the Greatest in Facing Ali. This fascinating documentary recounts the three-time heavyweight champ’s career through the eyes of the fighters who faced him.

Under the Radar: Indie darlings Joseph Gordon-Levitt and Zooey Deschanel star in the unconventional romance (500) Days of Summer. Gordon-Levitt plays Tom, a young man looking back on his year in a relationship with Summer (Deschanel), a girl for whom he fell instantly, but who doesn’t believe in true love.