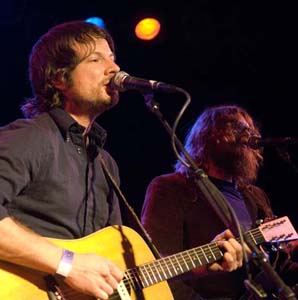 Just as Jack London’s 1904 novel, The Sea Wolf, chiseled a place for itself in literary history, Alex Brown Church’s band, Sea Wolf, have been at work carving a path in today’s cutthroat music scene. After the release of their new album, White Water, White Bloom, in September and their inclusion on the Twilight: New Moon soundtrack, Sea Wolf commands quite a contrasting audience. Pulling from all corners of Los Angeles, Sea Wolf filled the Roxy with trendy hipsters and pop-loving Twilight followers.

An L.A.-based band at heart, Sea Wolf is at home in hipster-adopted venues like Spaceland and the Echo; but this was their first time at the Roxy. Playing songs from all three of their albums, the band unveiled some lesser-performed material such as “Spirit Horse” and an exclusive to their vinyl LP, “Fighting Bull.”

Very aware of their newfound pop status and yet still staying humble and true to their indie rock roots, Sea Wolf performed a well-balanced mix of the new and old. Catering to their current following, guitarist Nathan Anderson appropriately dedicated their song “You’re a Wolf” to “Team Jacob.”

Regardless of whether or not you were there from the beginning or a newcomer to the sensation that is Sea Wolf, their show is consistent, refined and something that will come to contend with the likes of the Shins, Elliott Smith and fellow New Moon contributors, Death Cab for Cutie. —Andrew Herrold

I walked into Roxy not knowing what to expect. I just knew that this was hollowed rock ’n’ roll ground, and that many a leather-pants-wearing maniac with curled girl hair had howled the night away on that stage, while insane groupies writhed around in bacchanal bliss. So you can imagine my surprise when the four clean-cut guys of Chasing Kings assembled on the stage, most of them wearing a tucked-in, collared shirt.

For a second, I thought I was back in college at a political science study session. But no, what ensued was a good, passionate, hard-driving block of music, punctuated greatly by powerful drumming, clean bass and wicked guitar.

I would be doing a great disservice, though, if I did not mention the powerful vocals and keyboarding of Matt Schwartz. He anchored the band with a calm charisma that could only belong to a truly talented, and centered, frontman.

It was hard for me to define or compare Chasing Kings’ truly original sound to anything else I have heard before. It had a vibrant energy to it, and helped lead the new generation of rockers in attendance into a great night of music. —Geoffrey Altrocchi