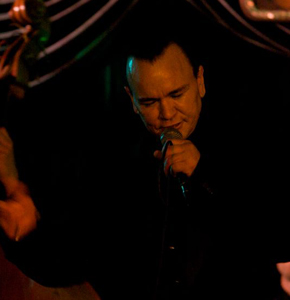 With martini glasses full and the floor freshly polished, the Mint welcomed its latest band to its stage, Royal Crown Revue (RCR). This classic swingin’ band got its fame from their work on The Mask soundtrack, featuring Jim Carrey bouncing around to their hit song, “Hey Pachuco.”

This time around the band isn’t doing a one-off. RCR is playing every Wednesday night in January, so you have a few chances to get your swing dancing skills in line to shred the floor with the rest of the guys and dolls.

The band barely fits on the intimate stage at the club, but their sound doesn’t come off as you might imagine in a crowded space. The horns fit nicely against the bass and guitar. In the percussion department, the drums stay in the pocket and drive the song without blasting your eardrums out like other small venues.

Vocally this show has everything you could want. A swingin’ frontman to lead the band, ripped right out of New York City circa 1930, keeps the show rolling and even gets a little support from some female vocal talent throughout the night.

By the time the first set is done you can’t wait for more. The cheap drinks make the dancing easy and the night fly right by. The Mint scored big time by landing Royal Crown Revue for this limited residency for the start to a great year.

For those of you that are a bit shy when it comes to shaking your tails, don’t worry. There are plenty of seats so you can watch the show and the friendly vibe will encourage you to do more than tap your feet if you want to cut a rug. So grab the crew and head down to the Mint and enjoy some truly great music that is money baby… money.