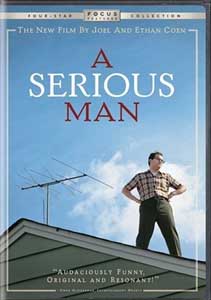 OSCAR RACE: The Coen brothers return in their most personal film to date, A Serious Man, about a Jewish family in 1960’s suburban Minnesota. After floundering in the early part of the decade with remakes and uninspired offerings, the Coens have found a mature voice that still retains the quirky sensibilities of Barton Fink and other early works. The result is something like a Philip Roth novel: funny and heartbreaking in its examination of alienation and entropy in the American Dream.

MY FUNNY VALENTINE: Co-written by Vince Vaughn and Jon Favreau and directed by Peter Billingsley (a.k.a. Ralphie of A Christmas Story), Couples Retreat centers on four couples that go to an island resort to recapture the magic in their troubled marriages. Co-starring alongside the Swingers duo are Jason Bateman, Kristen Bell and Kristin Davis.

THE HORROR! THE HORROR! If you’re looking for an alternative to all the romance in the air, you can’t do better than Zombieland. This horror-comedy in the vein of Shaun of the Dead follows two survivors of a zombie plague – one a nerdy college kid (Jesse Eisenberg), the other a crazed gun nut (Woody Harrelson) – who find themselves thrown together. The odd couple alternate battling each other and killing zombies while Harrelson pursues the last Twinkie on Earth.

“Nip/Tuck’”s Dylan Walsh stars in the remake of the 1987 cult classic The Stepfather. When Michael returns home from military school, he begins to suspect there is something sinister about his mom’s too-nice boyfriend.

Buster Keaton, Robert Duvall and Gene Hackman are among the long list of guest stars that crop up for season three of the beloved road trip anthology show, “Route 66.”

The Navy legal drama “JAG” comes to a close in its 10th and final season. The show follows two officers/lawyers who travel the globe investigating crimes within the military.

Robert Urich stars as a PI in Sin City in Vega$ The First Season, Volume 2. Tony Curtis co-stars as his casino owner employer. Writer/director Michael Mann got his start here.

UNDER THE RADAR: Endgame stars William Hurt and Chiwetel Ejiofor in his Golden Globe-nominated performance as the forces behind the fall of the Apartheid regime in South Africa.

Also available: The Song of Sparrows

FUNNY BUSINESS: In addition to starring, Ricky Gervais co-wrote The Invention Of Lying, a satire set in a world where no one can lie. Gervais plays Mark Bellison, a mediocre screenwriter for Lecture Films, who is unfortunately in charge of writing entertaining lectures about the dour 13th century. That is, until he accidentally lies one day. Success and fame follow. But to comfort his dying mother, he invents God. Soon the whole world holds him up as the voice of the Man in the Sky. A clever premise never really elevates past first draft material. The all-star cast includes: Jennifer Garner, Jonah Hill, Rob Lowe and Louis C.K.

BLU NOTES: Tony Jaa puts the art in martial arts in Ong Bak 2: The Beginning. The prequel follows the rise of an orphan trained to kill who is prophesized to conquer an empire. Jaa co-directed the film. The insanely acrobatic fight choreography is perfect for HD.