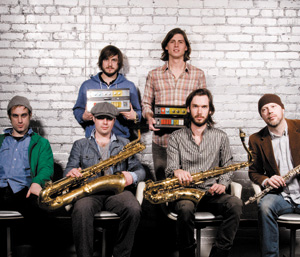 To put things a bit bluntly, it is a bit of a liberal arts college stereotype, this environment in which white kids dancing like white kids are getting funky to a white, bearded brass band that’s built loosely on the Afrofunk model. After a set by Orgone – funky, so painfully funky, whilst a fedora here or there could be found – NOMO got off to a mildly slow reception until about their third track in. Their take on Moondog (refer to last year’s Invisible Cities for “Bumbo”) didn’t quite seem to hit it for the crowd, but an increasingly raucous piece off 2008’s Ghost Rock did.

Led by soft-spoken bandleader Elliot Bergman (former Saturday Looks Good to Me), NOMO’s Spaceland stop came days after long hours were spent in a workshop making electric kalimbas for the purpose of sale via their label, Ubiquity. Their style, a blend of Afrobeat, free jazz, krautrock and funk, was, save for the built-up intensity that burst through an occasional sax solo, as reliable on stage as their records – not a negative trait, as their music is prime for dancing while they stand aside, but little band-audience interaction aside from a mild song credit here or there meant NOMO was the background band, and it was an odd change of pace to watch a band play soundtrack to a venue’s party, rather than act as a gawk-worthy focal point.