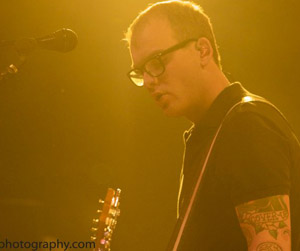 Formed in 1996, this band has managed to keep its audiences captivated. Playing to the sold-out House of Blues Sunset Strip, the trio had the crowd from the very start. This packed venue didn’t hold just loyal fans from the very beginning, but a healthy percentage of kids who might as well have been at their first show.

The first set of songs of the night included one of their staples, “Armageddon” and a new song, “Dine, Dine.” The break in the action as the new lyrics resonated with the fans let the pit subside for a moment. Unfortunately for those packed in tight, it was only a matter of time before the floor became alive with bodies once again.

When it comes to crowd participation and energy, Alkaline Trio is one of the top bands at making the audience feel like they are a part of the show. Just in the second song of the night, singer Matt Skiba opted out of the chorus and let the voices from the venue take over. From there, the show took on a life of its own.

The sound was the same as it has ever been, tight and clean. After playing together for so long the band really does sound like a well-oiled machine. With a small arrangement of pedals the sound stays fairly raw. Running guitars through a mix of amps, but still keeping a set of Orange heads on stage, the tone fit nicely with the harmonies and didn’t get swallowed up by the bass.

Playing for over 90 minutes, it only seemed like half of that, the way the night went by so quick. As soon as these sons of Chicago came in, they were done. Leaving the crowd with positive banter instead of an aggressive tone, everyone – even the kid that fell while crowd surfing – went home with a smile.