Where the Wild Things Are, Ponyo and More 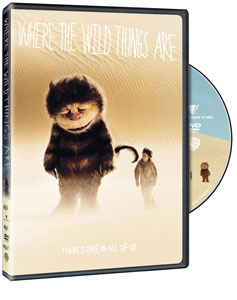 Great Adaptations: One of the most referenced and retold stories since the Bible, Lewis Carroll’s Alice in Wonderland gets another revamp in Tim Burton’s new film (in theaters this week). But for those of you who can’t get enough, check out these alternate versions:

“Alice,” a Syfy miniseries, transports the tale to the modern day for a very effective re-imagining. Like Tin Man, writer/director Nick Willing’s previous work, this is less an adaptation than a separate work inspired by the world of the original. The all-star cast includes: Tim Curry as Dodo, Harry Dean Stanton as Caterpillar and Kathy Bates as the Queen of Hearts. Caterina Scorsone of Edge of Darkness is Alice.

For a more faithful retelling, check out the original live action adaptation, Alice in Wonderland (1933). The amazing sets and makeup effects are done with the singular artistry of Hollywood’s early years. Cary Grant, Gary Cooper and W.C. Fields star.

Then check out Jonze and Lance Bangs’ documentary Tell Them Anything You Want: A Portrait of Maurice Sendak. It’s an intimate look at the success-averse, death-obsessed children’s author; a fascinating figure.

Made in Japan: Several special edition reissues accompany the release of master of animation Hayao Miyazaki’s latest film, Ponyo. Among them are the fantastic adventure Castle in the Sky and fan favorite My Neighbor Totoro. Ponyo is a re-imagining of Hans Christian Anderson’s The Little Mermaid. The beautiful film bares little resemblance to the Disney classic. It centers on a young boy who befriends a fish princess who, in becoming human, disrupts nature’s balance. An incredible voice cast includes Cate Blanchett, Matt Damon, Tina Fey and Liam Neeson. But, as usual, the true star is Miyazaki.

Under the Radar: The Last Hurrah is a clever and ambitious comedy shot in one 90-minute take by first-time filmmaker Jonathan Stokes. Lovers of Richard Linklater, Woody Allen and the Mumblecore crowd will dig this look at several philosophy major graduates and their search for love.

Paul Giamatti headlines a stellar cast including Emily Watson and David Strathairn in Cold Souls. The darkly philosophical comedy follows Giamatti as himself as he struggles in preparing to appear in Chekhov’s “Uncle Vanya.” Giamatti goes to a doctor (Strathairn) who removes his soul, a tiny chickpea-like thing, and freezes it until he is ready for it again. Fans of Charlie Kaufman, Luis Buñuel and Woody Allen should check it out.