The Hounds Below: March 2 @ Spaceland 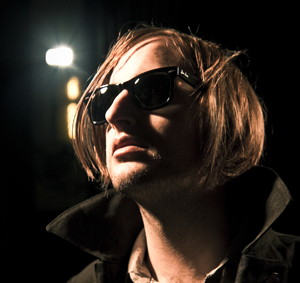 Jason Stollsteimer of the Hounds Below

Think Peggy Sue from a 1950’s diner and Julian Casablancas from the Strokes had a band of babies together. A bit knarley, but the Hounds Below somehow managed to take the sock-hop and drag it along musical genres reminiscent of Chuck Berry and modern punk rock.

It was simply marvelous, and altogether left me wanting more (The set was a mere five songs.). That’s alright, they are relatively new, with each member stemming from his (and her) respective own band. Headed by Jason Stollsteimer of the Von Bondies, he’s joined by an eclectic group of band mates, including the beautiful bassist Molly Jean Schoen (from the Decks), clean-cut guitarist Sean Lynch (800beloved), keyboardist Jeremy Freer (the Juliets) and drummer Brandon Macdonald (of Qualia/Friends of Dennis Wilson).

As Stollsteimer shyly admits to the medium-sized audience before him, “This is our first time in Los Angeles.” The response seemed to be ‘welcome,’ amazed at this new sound reverberating on the Spaceland stage.

Stollsteimer’s dynamism is in his vocal range. Their rendition of the Pixies’ “Where’s My Mind” almost had me second-guessing if it was in fact a cover. Stollsteimer transitions into the falsetto easily.

Four songs later, their final number, “Crawling Back to You,” had the band playing in a state of calm madness: somehow going nuts on their respective instruments but still maintaining the same brooding melancholy on their faces throughout. This tactic could be a double-edged sword performance wise. Though it places complete attention on their musical ability, a lack of attention and personal involvement with the audience makes you forgettable as a performer. This can be forgiven, but something the band should definitely work on.

Next for the Hounds Below will be the SXSW festival in Texas. We hope they come back and play longer next time.