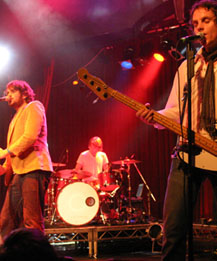 Fresh off their Mercury Prize nomination, Liverpool’s The Zutons started the night’s main event, playing a large chunk of their peppy new disc Who Killed the Zutons. While their songs did evoke feelings of a time gone by, they steered clear of the overblown retro-garage rock that has washed over the indie scene like a Floridian hurricane. Instead, they opted for a more full-bodied sound, like that of The Doors or even Bruce Springsteen-type rock ’n’roll, punctuated by the tattered saxophone stylings of pint-sized piper Abi Harding.

Amid the high-flying guitar slamming and vocal acrobatics of The Zuton’s lead vocalist David McCabe, there were cheeky flourishes like hand clap-alongs and some inspired scatting. These pop touches added balance to the set and segued nicely into the headliner’s set. One thing is for the certain – though their album title may say otherwise, The Zuton’s are far from deceased.

While The Zuton’s musical provenance may be difficult to pin down, The Thrills’ musical touchstone was as obvious as the smile on every concertgoer’s face as the Dublin quartet shimmied onto the stage. Dreamy pop melodies bathed in sunshine and dappled with harmonized choruses were the call.

The Thrills’ set, which relied heavily on songs from their breakthrough album So Much for the Sun, also included some hot-to-trot new tracks from their recently released Let’s Bottle Bohemia. New songs such as “Whatever Happened to Corey Haim?” were well received, but crowd saved their biggest freak-outs for the oldies, with “Big Sur” and “Santa Cruz (You’re Not That Far)” eliciting huge cheers for the songs’ tender lyrics and bright-eyed optimism.

When lead singer Conor Deasy sang the imploration from the tune “Don’t Steal Our Sun,” to refrain from stealing our sun because you’d just be “stealin fun,” he could have been targeting the security peeps who were prepping to shut the joint down for the early weekday curfew. Still, the light as air beach-pop tunes performed were enough to carry us out of the El Rey and back onto Wilshire Boulevard where, hopefully, something more pleasant than woolly mammoth skeletons awaited.