The Blindside and More 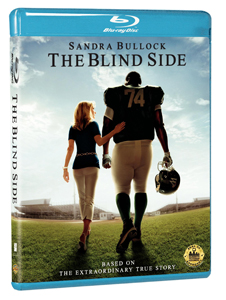 The Majors: Oscar’s Best Actress Sandra Bullock stars in The Blind Side, an uplifting true story about a privileged white housewife who takes in Michael Oher, a homeless African-American boy. They learn from each other while Oher trains to become an All-American football player.

A remake of Susanne Bier’s Danish film of the same, Brothers is an affecting drama about the collateral damage of war on everyday life. A U.S. soldier (Tobey Maguire) is taken prisoner in Afghanistan and presumed dead. Back home, his brother (Jake Gyllenhaal) starts to build a life with his widow (Natalie Portman) and children. Maguire escapes and makes it back home but is no longer the same man. Jim Sheridan (In America) directs some strong performances.

Director Chris Weitz (The Golden Compass) takes over the insanely popular Twilight franchise with the second installment, New Moon. But fear not, ladies, all the principals are back for the teen vampire romance, including the dreamy Robert Pattinson. Afterwards, check out the documentary Twilight in Forks, which explores the real town that was the inspiration for Stephenie Meyer’s best-selling novels.

The Idiotbox: Jim Caviezel stars in the American update of the cult ’60s hit “The Prisoner.” Caviezel is 6, a government agent who, after resigning his position, wakes up to find himself trapped in a creepily idyllic village where everyone is blissfully known by number. Ian McKellen is the demigod mayor 2. Gone are the brightly colored clothes, the village now resides in the middle of the desert (which actually makes a lot more sense). Still, the original was very much of its time and many viewers will be hard to win over with a slick, present-day remake.

The reigning king of hour-long dramas, “Mad Men,” returns to DVD for Season Three. Set in the early ’60s, the über-stylish show follows a New York City advertising firm. A strong ensemble cast, sharp writing and impeccable production design make it one of the best things on TV. The DVD also includes bonus features exploring the historical background behind this season.

Long-running family drama “7th Heaven” returns for its the Tenth Season. The show remains something of an anomaly, a heartfelt examination and celebration of the modern-day family.

The Vault: The Rolling Stones, the Beach Boys, Chuck Berry, James Brown and the Supremes are just some of the legendary acts to perform in the first rock concert film, The T.A.M.I. Show. Released in 1964 and filmed at the Santa Monica Civic, the film has since been difficult to see. The entire historic show is finally available on DVD, with bonus commentary by director Steve Binder.

Made in Japan: Evangelion 1.11 You Are (Not) Alone: This “rebuild” of the anime classic includes 266 visual and audio improvements, with an hour of bonus features.

The Straw Hats, modern day pirates are back in One Piece: Season Two, Sixth Voyage.

The original cast of “The Slayers” returns for the first time in over a decade for The Slayers Revolution.

Blu Notes: One of Wong Kar-Wai’s best films, Fallen Angels, comes to hi-def Blu-ray. The beautifully shot, neon-painted film follows a hitman on his last job around the Hong Kong night. In love with his partner, the tormented killer searches elsewhere for distraction, coming into contact with a series of lonely eccentrics in a dreamlike film.