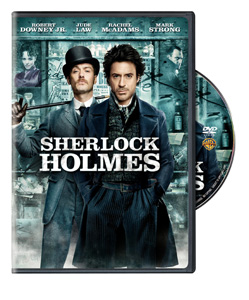 Director Guy Ritchie (Snatch) returns with a slick update of Sherlock Holmes. The eminently watchable Robert Downey Jr. is the Great Detective, while Jude Law is sidekick Watson. Ritchie gets some of his groove back in this fun rethink that has Holmes matching wits with an undead serial killer threatening England. Rachel McAdams also stars.

With the release of Tim Burton’s Alice in Wonderland, it’s Lewis Carroll month in DVD Land. Alice in Wonderland: Classic Film Collection contains five adaptations of the novel: the 1915 silent film, two Walt Disney-directed animated/live action shorts, Alice of Wonderland in Paris (1966) with the voice of Carl Reiner and a 1972 British musical version with Peter Sellers and Dudley Moore.

Political activists for the 21st century, the Yes Men return in their second documentary, The Yes Men Fix the World (April 1). The muckraking pranksters set up elaborate hoaxes in which they pose as spokespeople from various corporations and government agencies in order to draw media attention to crimes perpetrated by these powerful forces. In this installment of their continuing adventures, the Yes Men take on profiteers in post-Katrina New Orleans and Dow Chemical, who 25 years later still refuse to take responsibility for a tragic factory explosion in Bhopal. The resulting film is inspiring, funny and, they would hope, galvanizing.

In the mid-’60s, several New York artists collaborated with engineers from Bell Telephone Company to push the envelope of artistic expression utilizing new technology. Composer David Tudor created a mind-blowing composition entitled Bandoneon! (A Combine) that was captured on film and is now available as part of a documentary on the piece. For the work, Tudor used a bandoneon (something like an accordion) to trigger a series of effects loops and visual interactions to create something wholly original.

There’s nothing quite like a good horror-comedy. I Sell The Dead stars Dominic Monaghan (“Lost”) as a 19th century grave robber who tells his supernatural tale as he faces the guillotine. Ron Perlman co-stars as his confessor.

Nominated for a Best Foreign Language Oscar, Germany’s The Baader Meinhof Complex is the true story of a group of young German radicals who turn to violent means as a way of fighting American-German imperialism in 1970s Germany. Bernd Eichinger, writer of the intense Downfall, provides the script.

Finally getting a domestic DVD release, The Killer made Hong Kong director John Woo and actor Chow Yun-Fat international stars. After a hit man accidentally blinds a singer, he takes one last job in order to pay for her treatment. But things are never that easy. Woo’s signature style of operatic violence is on display.

From the lost city of Atlantis to the Zodiac Killer, History Channel’s “Mystery Quest” sets out to find the truth behind some of the biggest mysteries in the world. Using shiny new technology and good ol’ fashioned exploring, they shed new light on: Stonehenge, Amityville, the Bermuda Triangle and more. The Complete Season One is now available.

Who knew action star Steven Seagal was a fully commissioned sheriff’s deputy in Louisiana? Apparently, he’s been enforcing the law there for real for 20 years. For those lamenting Seagal’s flagging movie career, he’s now got a reality show, “Steven Segal: Lawman.” The Complete Season One is now available.

Just in time for the big screen remake of Clash of the Titans, bone up on your Greek mythology with Clash of the Gods: The Complete Season One. Each episode of this History Channel show focuses on one mythological figure from Zeus to Medusa to the Minotaur and explores the real-life basis behind them. The show also branches out into other myths, from Beowulf to Tolkien.