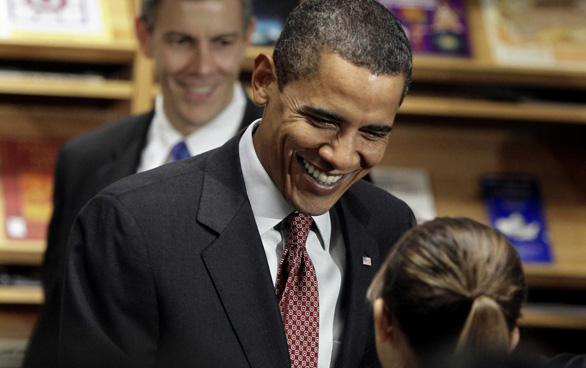 President Barack Obama signed into law the last piece of his mammoth plan to overhaul health care March 30 and, with the same pen strokes, achieved a dramatic and far-reaching change in the way most Americas help pay the cost of a college education. Both the health care provisions and revamping the loan program for college students were sandwiched into a single piece of legislation – the budget reconciliation bill approved last week by the House and Senate.

And, while the changes in the health care system are historic, the changes in the student loan program – though smaller – are just about as drastic. After years of controversy over a system in which the government and the private sector were major players, the new law ends the role of private banks as “middle men,” cuts program costs and channels the extra money to the neediest students.

Overhauling the loan program, which fulfilled an Obama campaign promise, was a kind of stealth accomplishment for the president, coming as rider on the final piece of health care legislation.

The bill would shift responsibility for making cut-rate student loans to the government, ending the federal subsidies and guarantees now given to private banks that lend to students.

The overhaul was a defeat for the banking lobby, which has long succeeded in blocking efforts to cut out their lucrative role. Ironically, the health care debate has been replete with outsized warnings of a government takeover of health care, but the student loan overhaul marks an even more direct government move to supplant the private sector.

Rep. John Kline of Minnesota, ranking Republican on the House Education and Labor Committee, says the law amounts to “replacing a popular student loan model with yet another one-size-fits-all government bureaucracy,” that would destroy 30,000 jobs in the private student loan industry.

Sen. Charles Grassley, R-Iowa, says that students would prefer getting such critical financing from a banker they know rather than from anonymous bureaucrats. “I don’t see how the students of this country are going to get the same service out of four call centers as they get from their individual banks,” says Grassley.

Because studies show the government-operated program would be less costly, the overhaul would free up money to increase Pell Grants for low-income students and aid to black colleges.

Obama, speaking to a crowd of students at a community college in suburban Virginia before signing the legislation, says money that should have been spent advancing the educational interests of students “instead was spent padding student lenders’ profits.” “I didn’t stand with the banks and the financial industries in this fight. That’s not why I came to Washington. And neither did any of the members of Congress who are here today. We stood with you. We stood with America’s students,” he says.

In his Tuesday speech, Obama offered a preview of how in this election year Democrats plan to cast the health and education initiatives as help for families against moneyed interests that have profited in their time of economic distress.

The success of a little-noticed student loan bill was a testament, in part, to the changes in the balance of special-interest power in Washington since Obama became president and the economy has struggled through difficult times – a shift that eroded the effectiveness of financial industry lobbyists, especially as the public soured over bank bailouts and the role of financial institutions in precipitating the recession.

The Obama proposal “lent itself to the politics of the time more so than it would have three or four years ago,” says John Dean, special counsel to the Consumer Bankers’ Association, which opposed the legislation. “Many people see the recession was caused by the misbehavior by banks.”

What is more, the idea was particularly appealing to a deficit-conscious Congress because the shift to government lending would save an estimated $61 billion over 10 years. The new law will make it easier for borrowers to repay their loans if they take low-wage jobs by capping monthly payments at 10 percent of their income, down from 15 percent now. In addition, the new law would cancel any debts that remain after 20 years; under current law, loan balances are forgiven after 25 years.

“We are sending millions of young Americans into significant borrowing decisions with nothing but hope,” says Barmak Nassirian, an official of the American Association of Collegiate Registrars and Admissions Officers. “The income based repayment system ... is an enormous safety net.”

US News
What we know about Mark Riddell, a test-taking whiz linked to college cheating scam
525 views

US News
California gunman was ex-Marine who might have suffered from PTSD, sheriff says
927 views

US News
Rates of 3 STDS in US reach record highs CD says
1,028 views

US News
Trump’s tax cut not for everyone: 1 million Californians will owe $12 billion more next year
2,479 views

US News
Starbucks will close stores to provide racial-bias training to 175,000 US employees
1,766 views