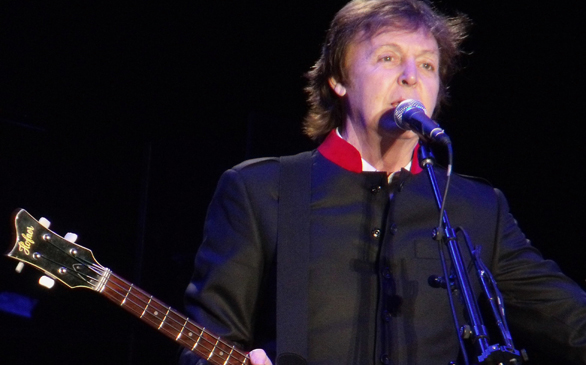 “You’ve come a long way, baby,” said Paul McCartney to his fans at the Hollywood Bowl, words more fitting to the legendary artist than for the crowd; a crowd who grew up on McCartney’s music, be it with the Beatles, his follow-up band Wings or his eclectic solo career. Having first played the Bowl in 1964 with the Beatles, McCartney peppered the show with a merry mix of songs that played like a rock biography.

Songs like “Jet,” which got fans on their feet to Beatles’ favorites like “Day Tripper” and “Eleanor Rigby” to “Sing the Changes” from 2008’s Electric Arguments, McCartney filled the Bowl with more than two-and-a-half hours of music and nostalgia. He played tribute to many special people in his life who have come and gone, starting with a blistering cover of Jimi Hendrix’s “Foxey Lady” to a moving rendition of “Something” in tribute to fallen band mate George Harrison.

“George was a really good ukulele player,” smiled McCartney, who played the ukulele given to him by Harrison during the show.

With a backdrop of scrolling family photos, vintage video and mementos from the past, McCartney shared personal stories that accompanied his music. “Here Today” was a song written for John Lennon as a conversation he never had with his songwriting partner and friend, while the heartfelt “My Love,” was dedicated to all the lovers that night, although originally written for his beloved late wife, Linda.

But don’t get me wrong, McCartney and his band gave the audience energetic highs with “Live and Let Die” synchronized to a crackling fireworks display, and the epic “A Day in the Life,” which morphed into a crowd sing-along to Lennon’s “Give Peace A Chance.”

Lighthearted and jovial, McCartney was exactly what you would expect – the lovable Beatle, the dapper gentleman of a musician opposed to the stereotype of a rock performer with screaming lyrics and bleeding fingers during guitar riffs. But seriously, how does one say anything bad about a living legend? You don’t, but only because you can’t when it comes to Paul McCartney.