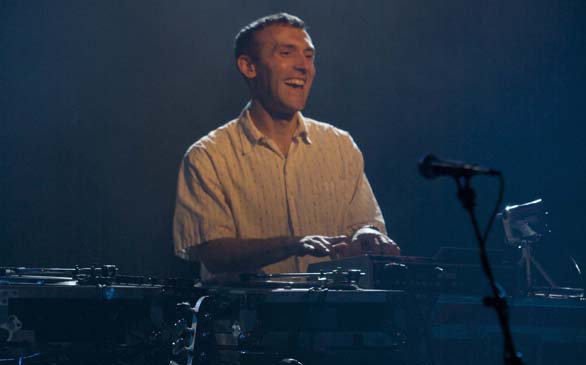 How does an experimental DJ sell out venues across the globe without having one dance hit? This guy doesn’t even have any real songs that you would dance to for that mater. But when RJD2 descends upon the stage, it’s little wonder as to why people flock to see this show.

Starting things off with a straightforward DJ set flanked by a giant screen flashing visuals from The Matrix and “Aqua Teen Hunger Force,” the crowd started to get in the mood. Blanketed by smoke and dim lights, the connection between artist and fan was nil until the lights went up on the crowd and the tempo changed. This break in the action fired up the crowd, and RJD2 started moving around a bit until his energy was matched by the kids in the audience.

Knowing that it’s tough to sit back and just watch a DJ spin all night, a full band was brought out to jam away on a few tracks. The sound of Kaoss Pads and live instruments filled the El Rey, and as RJD2 headed back to his turntables, we even got a chance to see him smile.

The sound was excellent, and the new mixture of rare instruments added into his antique collection of sound boxes came off strong. It’s one thing to hear songs produced in a controlled setting, but to be able to replicate the sound on tour is another. The only issue with the show is that it was too short. Only having a little bit of time in between songs, a lot was packed into the 90-minute set. By the time the show was over it felt a bit rushed, and there wasn’t a lot of time for freeform jamming, one of the things that RJD2 has been known to pull off at shows.

DJ or band, anyway you cut it the sound is what matters in the end, and it was great. The crowd of fanboys was happy and the bridging of RJD2’s live skills with his production ability was solid. A good performance that illustrates that as a DJ you don’t need dance hits to sell out shows.