OK, Anime: We Get It 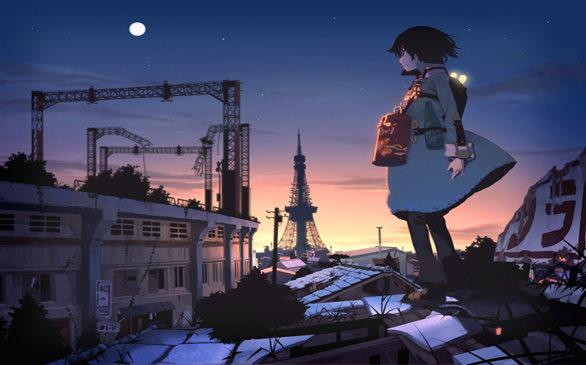 "Fragile Dreams: Farewell Ruins of the Moon" is original and unique.

Love it or hate it, Japanese animation is almost unavoidable in modern gaming. Our plumbers may be Italian and the street fighters are from all around the world, but the art style is pure Japan. Even the hyper-realistic games draw from movie action sequences that were inspired by anime.

Needless to say, the one place where you cannot avoid anime is in Japanese role-playing games. Americans really only get a small sampling of the vast array of JRPGs, but it’s obvious from the few we do get that whenever an unlikely group of heroes gathers together to stop some vague evil force from gathering ancient relics, you can expect that they will have the big eyes and crazy hair of anime. In fact, it is almost impossible not to think of Japanese animation whenever the letters RPG are uttered.

The obvious extension of this is that RPG developers like to put anime cutscenes into their titles. This practice became very popular when RPGs first came over onto CD-based gaming platforms where they could take key moments and make them into glorious, cinematic animated sequences. That said, there is a point where we are no longer playing an anime-inspired game and instead have started to watch an anime with occasional interactive segments.

OK, so “Lunar: Silver Star Harmony” may not be that bad, but this PSP remake of the classic 2-D RPG has always been heavy on the anime. For those who never played the original title, it is a beautiful fantasy epic that follows a group of young anime heroes as they fight to save the world with nothing but the power of turn-based combat. As you can expect, the anime cutscenes are gorgeous and plentiful.

Fans of “Lunar” can rest assured that the game has actually been improved in this PSP recreation of the classic. The artwork has gotten a 3-D polish, which takes the stubby, pixel-based sprites and breathes new life into them. The battle sequences feel more intense – even when your fighter rushes halfway across the screen with sword drawn only to find they can’t get close enough to stab their target – and the cinematics look great on the PSP screen.

Unfortunately, the cinematics are so dense that they go from a beautiful accent to a hindrance. The beginning of the game is so thick with in-game dialogue and animated clips that you may start to wonder whether there is a game coming up. The story’s sweetness is actually dulled quite a bit by the fact that it is hard to keep caring about characters that you don’t really have control over for far too long. The whole experience shows just how much love has gone into the generations of this title, but it would have gained so much more by being more sparing with the cutscenes.

Going from the old to the new, “Fragile Dreams: Farewell Ruins of the Moon” for the Nintendo Wii offers a story that is both original and uniquely anime. This unique mix of survival horror and action-RPG follows Seto, a young man who finds himself alone in the world after his mentor dies. Seto has no idea of anything outside of his home, but the search for any other humans in this strangely empty world drives him to leave everything he has ever known. So, armed with just a flashlight and a stick to hit ghosts with, Seto heads out in search for a mysterious silver-haired girl.

“Fragile Dreams” is nothing if not elegant in its depiction of an empty, modern world and the wonders that it could hold. Everything from the grungy underground shopping mall to the ghostly beauty of the open sky has a memorable appeal that could only come from an anime world. Even the hordes of uncomfortably similar-looking monsters are as pretty as they are vicious. Match this with a unique use of the Wii remote and you get an engrossing, charming game.

Of course, anime is a dual-edged sword. For all of the beauty, the anime inspires far too many cutscenes early on in the game. The cinematics are spread out further into the game, but the repeated anime asides take the player out of the moment and essentially kill any suspense. Admittedly, the game falls more on the side of sentimental than on horror, but like “Lunar,” even touching moments become dull when you can literally put down the controller while waiting to be able to play again.

Both games are fun and beautiful, but they do remind us that less anime is more.