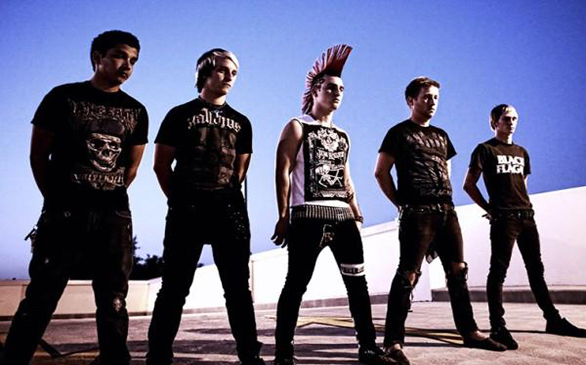 Warped held their annual Kickoff Party hosted by the audacious Shira of ShiraGirl at the Key Club to show off this year’s tour regulars. Starting off the night was Death Punch. As your classic hardcore-tinged skater punk band (complete with a mohawk’d lead singer), Death Punch rawked out with that perfect mix of guitar and spit that embodies everything Warped Tour has come to represent. So if you’re going for the punk, definitely don’t miss Death Punch.

Next up was this year’s pick for Weird Band You Have to See Live: Reverend Peyton’s Big Damn Band. This bluegrass-rock trio’s songs are admittedly a bit repetitive, but once you see Reverend Peyton’s insane picking or Breezy Peyton’s involved washboarding, you’ll be glad you went to see their set. And with songs like “Your Cousin’s on Cops,” why would you want to miss them anyway?

After a short emcee battle and Oompa Loompa dance (don’t ask), one of the most debated bands took the stage: the Pretty Reckless. Now, I’m a bit of a purist, so I was definitely leery when Taylor Momsen (of “Gossip Girl” fame) took the stage with her much older band mates, but lo and behold they’re not half bad! TPR is one part Alanis Morissette, one part Joan Jett and one part My Chemical Romance, with driving guitars and heady drums that are more rock than pop. And while she’s still figuring out how to act on stage, Momsen’s got a set of lungs on her! Just remember guys, she may look hot in that low cut top and ripped up stockings, but she’s only 16.

Ahem. As this year’s emo-hardcore band, Pierce the Veil whipped the crowd into a frenzy with their energetic and heartfelt guitar-driven ballads. AP named their new album as one of the most anticipated of 2010 and for good reason.

They were also the perfect lead up to Warped veteran and headliner Andrew WK, who brought the crowd to new mosh-inducing heights with that brand of head-banging party rock that only he can bring. And the best part? He totally loves his fans. Not only does he watch them crowd surf their way up to the stage and dance on it (until security forces them off at least), but he shakes hands, hands out picks (instead of throwing them), sprays water on the crowd from the bottle (instead of his mouth) and sincerely talks to the crowd like the thankful artist he is. All while having a ton of fun!

Of course, there’s so many bands on the tour every year there’s bound to be at least one good find in the bunch, but if these guys are an accurate cross section, this year should prove to be one of the most fun in Warped history.