The Imaginarium of Doctor Parnassus and More 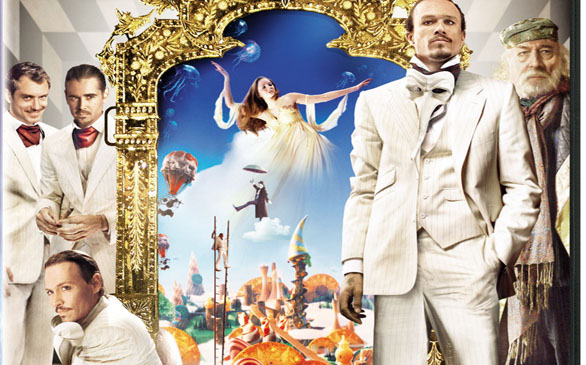 With The Imaginarium of Doctor Parnassus, writer-director Terry Gilliam creates one of his most ambitious and inventive films in some time. The nebulous plot revolves around a dream world sideshow run by a magician (Christopher Plummer) who is trying to get out of a deal with the Devil (Tom Waits!) with help from a rescued stranger (Heath Ledger). Completing Ledger’s unfinished scenes are Johnny Depp, Jude Law and Colin Farrell.

It’s Complicated is a refreshingly adult comedy from writer-director Nancy Meyers (Something’s Gotta Give) with a stellar cast. Meryl Streep, Alec Baldwin and Steve Martin are caught up in a messy back and forth love triangle. “The Office”’s John Krasinski co-stars.

The Descent: Part 2 follows up the best horror film of the decade with a solid sequel. Sarah Carter, the lone survivor of the first film, has to lead a rescue team back into the Appalachian caves and the horrors that lurk there.

Andy Kaufman’s act was always more akin to performance art than stand-up comedy. He actively attacked the notion of celebrity with strange public behavior of which no one was quite sure how much was a joke. Wrestling women was one such stunt, documented in Andy Kaufman: World Inter-Gender Wrestling Champion.

Two fascinating Americans are the subjects of two new documentaries: Milton Glaser: To Inform & Delight and William Kunstler: Disturbing the Universe. Glaser, one of the most famous graphic artists ever, co-founded New York Magazine and created the iconic I Heart NY campaign. Kunstler was a radical civil rights lawyer involved in cases ranging from the Chicago 8 to Attica prison and Wounded Knee. His daughters crafted this intimate look at the man.

Fiesta Cubana – Live from the Tropicana features Omara Portuondo and her five-man band on New Year’s Eve 2009 at Havana’s legendary nightclub, the Tropicana, as it celebrated its 70th birthday. Catch this colorful revue, singing, plus an insightful interview with Portuondo.

One of the most distinctive and versatile stars of classic Hollywood is showcased in The Barbara Stanwyck Collection. The set includes six rarely seen gems, including: Internes Can’t Take Money, The Great Man’s Lady, The Bride Wore Boots, The Lady Gambles, All I Desire, There’s Always Tomorrow.

The magnetic James Nesbitt returns for a second season in “Murphy’s Law.” Tommy Murphy is a wisecracking Irishman and the best undercover cop in London. But Murphy has his share of demons (His daughter was killed by the IRA.). Series Two is even more intense than the first.

Haunted: The Complete Series stars Matthew Fox as a P.I. who survives a near-deadly shooting only to come back still connected to the world of the dead.

The life of one of America’s great painters is chronicled in the Golden Globe-nominated Georgia O’Keeffe, starring Joan Allen. The film follows the artist and her turgid love affair with photographer Alfred Stieglitz (Jeremy Irons).

Two great Irish actors square off in Five Minutes of Heaven. Liam Neeson plays a former UVF member who 25 years ago killed the brother of Catholic James Nesbitt (“Murphy’s Law”). Now, the media has arranged a meeting between the two.

Like Babel, Mammoth shows the growing complexity of a shrinking modern world. It centers on a successful New York couple (Michelle Williams and Gael García Bernal) whose daughter is closer to their Filipino maid than them. Swedish filmmaker Lukas Moodysson (Lilja 4-Ever) directs.

Lynn Collins (“True Blood”) and King of the Indies Joseph Gordon-Levitt star in Uncertainty, a small film, which shows two possible futures of a young couple at a crossroads.