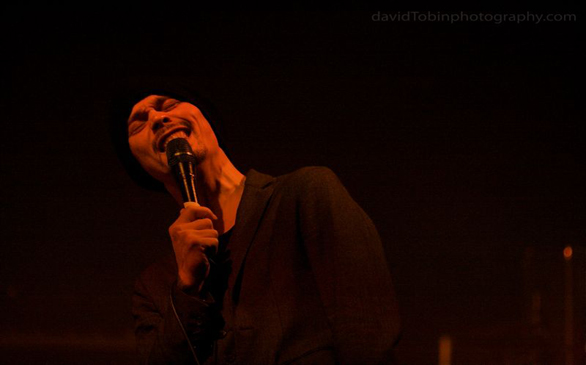 Roughly six years ago, I got to see the first live performances of His Infernal Majesty (HIM) at the Roxy and then again at the Viper Room. Both performances left me disinterested in the band and with a heavy distaste for their sound.

However, after seeing the band take the stage at the Wiltern, my mind was changed. It’s a great feeling to dislike a band and then be proven wrong years later, especially when they come out on stage with no costumes or effects – plain clothes and honest to the music.

It took me a song to get over my previous feelings, but once the second track kicked in, the crowd let me know I was not alone in enjoying this ferocious wall of sound. The band was as tight as any that has been playing this long. Changing time in the middle of verses and sounding flawless, their heart-crushing lyrics stood on solid ground as the set got louder and louder.

Frontman and vocalist extraordinaire Ville Vallo has a subtle way about him that makes his time on stage seem effortless. Barely holding onto the microphone and without a wince of pain, he manages to belt out melodies that would make Freddie Mercury proud.

It’s not just the amazing vocals and song construction that made this show a night to remember, but the way the band worked together. Ripping guitar solos that were a thing of the past mixed with a drum and bass sound all their own kept the audience moving from start to finish.

The way that Vallo worked the crowd with inspiration and call and response broke the fourth wall that so many artists fear to take down. Bridging the gap between fan and frontman is the reason we go to live shows, and HIM not only broke down the walls, they tore the whole damn house down.