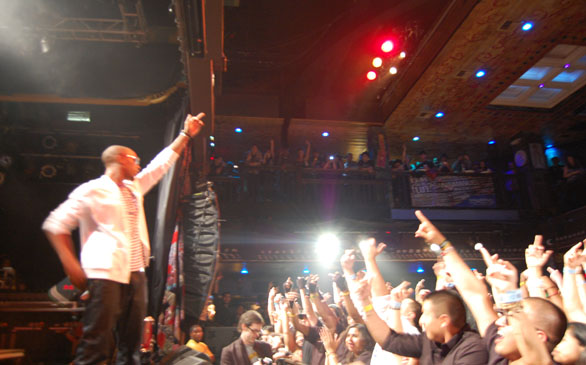 Newcomer B.o.B.’s swag is part rapper, part hipster, part rocker and all parts good. B.o.B.’s high-energy performance was well received by an audience who was likely there to see the headliner, Lupe Fiasco. But B.o.B. took the stage by storm, jumping and pumping the crowd up. His genial demeanor made for an undoubtedly better approval rating when he reached out and grabbed a fan’s CD, took it from them and said, “I’m gonna sign this,” making him seem less of a snooty superstar, and more of a friend.

His performance of “Nothin’ on You” was clearly the most anticipated as the audience sang along, shaking the stage with sound. Female fans waved frantically at him, wishing they had someone like B.o.B. to dedicate this song to them.

However, that not being the case for most girls, a more appropriate song could be “Haterz Everywhere.” He had the crowd giving the one-finger salute in tune to the beat, singing, “Hataz everywhere we go.”

The HOB was an ideal venue for a performance that was a blend between rock concert and rap show by B.o.B. and Fiasco. The intimate floor area helped the audience feed off each other’s energy as well as the artists’. Through the heat and closeness, the crowd came together as a single entity (more as a mob actually) to enjoy the performance; one fan even going as far to describe it as “the time of my life.”