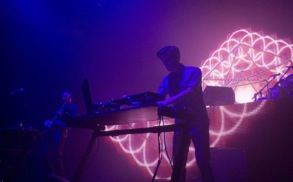 Luis Enrique had the audience singing along to his hits.
(Credit: Lynda Correa)

Well-known salseros Luis Enrique, Gilberto Santa Rosa, Willy Chirino and Oscar D’Leon came together at the Gibson Amphitheatre in Universal City. Each performer drew their most loyal fans, and combined together, the arena held a sizable crowd.

Once the drums started bumping and trumpets started blaring, a rush of affection for each entertainer was sent to the stage. Artists not only performed, but also actively interacted with the crowd. For example, Enrique got the audience to sing along to his music and accepted a bouquet of flowers handed to him by a fan. It’s that sense of family and friendliness that makes an event like this worthwhile.

However, because of the long, awkward intermissions between sets, it was difficult to keep the energy flowing. There were good intentions, but the type of music being played was not meant for an amphitheatre. Salsa is meant to be danced to, and yet no one was dancing, save a few gutsy groups who decided it was OK to stand and sway during the performances (power to them – more people should have followed their example). In all, it was a nice place to go to listen to the Latin music being played, but the show as a whole fell a little under “alright.”