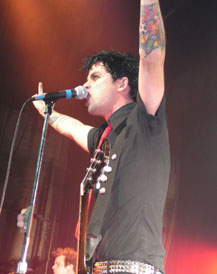 When Billie Joe Armstrong, frontman for Green Day, came out and screamed, "This is like our CD release party! And we’ll be playing our new album from beginning to end," he wasn’t kidding. Starting with the political anthem song "American Idiot" – an ode to Mr. President himself – Green Day kicked off their celebration in song.

Singing every song on American Idiot (released on Sept. 21), tunes such as "Boulevard of Broken Dreams" showcased their more melodic ballad side, while others like "Letterbomb" proved Green Day can still create one raging mosh pit.

Famous fans seen in the crowd included Tim Armstrong of Rancid and Jane Wiedlin of ’80s band The Go-Gos, who, along with the packed house, enjoyed Green Day’s somewhat political and definitely rebellious performance. Red, white and blue confetti showered the fans during "We’re Coming Home Again" as Armstrong raised his fist in the air and ended with "Whatsername," the final song on the new album.

Just as fans began to shake their heads in disbelief that the show was over, Green Day rushed back onstage with a tirade of favorite hits including "Longview" and the ever-popular "Brain Stew." Green Day’s rousing cover of Queen’s "We Are the Champions" was their fitting farewell song – quite apropos for a band that proves exactly that with each and every show.