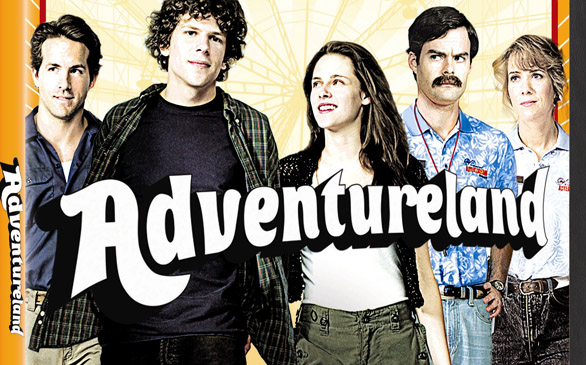 Get out and support your local video store this summer with some of these recommendations:

Libeled Lady: You’ll have a grin plastered on your face for the entirety of this highly enjoyable screwball comedy. The all-star cast is led by the dynamic duo of Myrna Loy and William Powell, accompanied by Spencer Tracy and Jean Harlow. Powell is a writer brought on by newspaperman Tracy to entrap heiress Loy into having an affair to avoid a libel suit.

Adventureland: You might have missed this small but charming dramedy from last year, about a college grad working at a theme park over a summer. It’s a rare film that gets the awkwardness and malaise of pre-adulthood so right while still being funny. It’s one of the best coming-of-age films in years. Jesse Eisenberg and Kristen Stewart star.

The Fortune Cookie: Best known for masterpieces like Some Like It Hot and Sunset Boulevard, Billy Wilder’s resume contains many hidden gems. This comedy once again re-teams Walter Matthau and Jack Lemmon as a shyster lawyer who convinces a cameraman to sue the football star who collides with him on the sidelines. The onscreen chemistry is effortless.

The Vanishing (1988): This Dutch thriller (later remade with Jeff Bridges) follows a man on an obsessive, self-consuming journey to find the girlfriend who suddenly went missing during a trip to Paris. It has one of the greatest endings in movies.

Timecrimes: Who doesn’t love a good time travel flick? This Spanish thriller follows a man who accidentally travels back in time one hour and manages to cause disaster then desperately tries to fix it.

Shoot the Piano Player: Sure, everybody sees The 400 Blows first (and rightfully so), but check out François Truffaut’s second effort in all of its New Wave-y glory. Truffaut was never again so playfully experimental as in this noir homage.

John Frankenheimer has never really achieved true auteur status, but this underappreciated and stylish director has a long list of great films. After the masterpiece The Manchurian Candidate, check out two of his other thrillers: the trippy existential mystery Seconds, starring Rock Hudson, and the ’70s terrorism-at-the-Super-Bowl flick Black Sunday.

Complete your Flynnathon with The Sea Hawk, about an English pirate who takes up the cause of the crown against Spanish ships.

Charley Varrick: Finally available on DVD, this ’70s thriller by director Don Siegel stars Walter Matthau as a small-time bank robber who rips off the mob. Joe Don Baker is a gas as the hitman sent to hunt him down.

Scarecrow: Check out a young Al Pacino before all the yelling and self-parody, back when he gave understated, nuanced performances. He stars alongside Gene Hackman as a pair of mismatched tramps.

Supernatural: Yes, it’s on the CW and it has its cheesy moments, but give it a chance and you’ll find this guilty pleasure features some of the best horror writing around. The show follows a pair of brothers as they travel the country hunting other worldly evils. Hey, it’s good enough for an endorsement from Clive Barker.

The Wire: It’s been said before, but if you haven’t seen this HBO series yet, do so immediately. It’s the best thing ever on television and currently the subject of a course at Harvard.