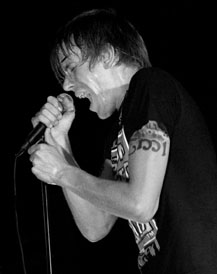 Say what you will about Swedish imports Blindside, but see them live and they’ll set you straight. First, they are not screamo. And second, they’re not repeat one-hit wonders, unlike another band from their home country (think about that for a minute), so don’t even try comparing them.

Even if their style isn’t typically what you’d go for, Blindside has proven itself to have something all rock fans can appreciate. From singer Christian Lindskog’s soaring and flat out awe-inspiring vocals to guitarist Tomas Grenhed’s metal style thrashing, Blindside has so much more talent than it was – and still is – ever given credit for. Although they didn’t do their trademarked cartwheels on stage, it’s OK – they made up for it with sheer, raw energy.

Opening band the Kick rocked an initially unresponsive crowd, but eventually won them over with its brand of poppy, upbeat rock and a few choice lines from Napoleon Dynamite. Fellow opener mewithoutYou, on the other hand, took a much more artsy rock approach, winning over the crowd with frontman Aaron Weiss’s surprisingly endearing social ineptitude, giving hope to all us geeks everywhere.