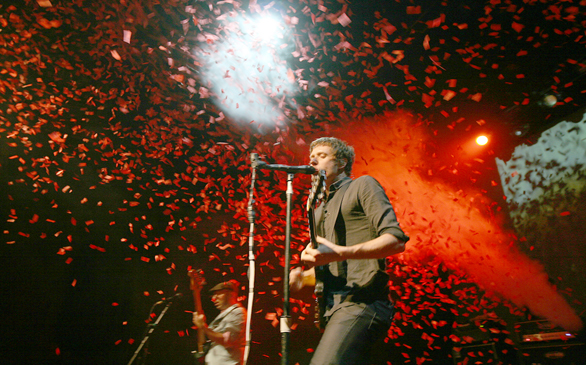 First let me tell you that OK GO is all about fun. It’s a quality that is hinted at in the videos for which they are best known for, but to truly understand it you have to go to an actual show.

Right out the gate, the first song was accompanied by a confetti canon that filled the theater with confetti and would continue to issue such joy periodically throughout the evening. Between songs, the banter of the very charismatic lead singer Damian Kulash was quite entertaining. If you only know the band from the music videos, the guy with the mustache is not Kulash. The mustachioed gentleman “singing” in the videos is the bass player, Tim Nordwind.

Nordwind didn’t really say much during the show. However, he and Kulash did sing an entire song from “Les Misérables” together at one point. No, it wasn’t a rocked-out cover, it was just the two of them singing a cappella. I’m not at all familiar with the play, so I can’t tell you which one it was, but it was pretty funny.

The show was full of random/fun moments like this. For one song the band decided to put down their electric instruments and play the bells instead. Yes; the bells – the very same kind that are played in churches, especially around Christmastime.

Kulash even came out into the middle of the audience for one song and played it by himself. It was a very special moment.

They allowed the crowd to participate for the more popular “This Too Shall Pass” by asking them to sing a part during the song. For “Here It Goes Again,” Kulash allowed one lucky audience member to strum the guitar part from the front row.

It truly was a very fun show.