Alice in Wonderland and More 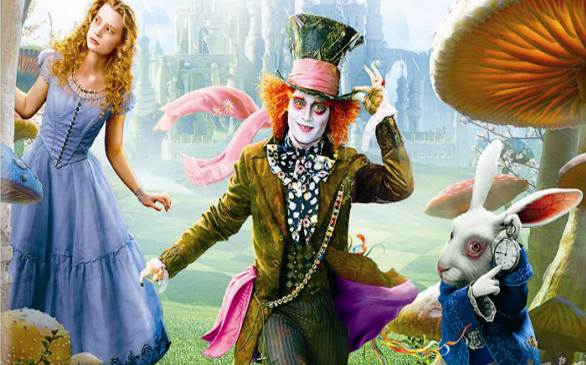 Johnny Depp is the Mad Hatter in Tim Burton’s update of Alice in Wonderland. It’s not so much a remake or adaptation as a loosely inspired, darker takeoff of the source material. The film takes place in Underland, a dystopian fantasy world ruled by the cruel Queen of Hearts (Helena Bonham Carter). Now Alice must slay the Jabberwocky and return the White Queen to power.

Monty Python reunited for a one-night only performance of Not the Messiah (He’s A Very Naughty Boy), a musical tribute to their classic The Life of Brian. Eric Idle and Spamelot” co-creator John Du Prez staged the over-the-top operatic extravaganza in celebration of Python’s 40th anniversary.

Also available: The 41-Year Old Virgin Who Knocked Up Sarah Marshall and Felt Superbad About It.

Just when you thought you’d seen every addiction and neurosis, Hoarders: The Complete Season One takes you inside the cramped houses of people who are addicted to stuff, terrified of throwing anything away. It’s a fascinating and disturbing look at the myriad ways the human mind has of reacting to trauma.

I Know What I Saw compiles interviews with credible UFO witnesses like Air Force generals to craft one of the more convincing cases for extra terrestrial existence.

In Meredith Monk: Inner Voice, viewers revel in 40 years of artistic expression from the singer, dancer, filmmaker, composer and choreographer.

“Curb Your Enthusiasm” returns to form in its seventh season with the “Seinfeld” reunion storyline. Everyone’s favorite neurotics are reunited, playing themselves, kind of, as Larry tries to mount a reunion show. But things are never easy for the king of awkward social interactions.

The uber cool comedy/espionage thriller “Burn Notice” returns in Season Three. Jeffrey Donovan is magnetic as an ex-CIA Agent who was “burned,” left jobless and without any of his assets. Now with the help of a retired agent (the always amazing Bruce Campbell!) he will try to find who burned him, in the meantime taking assignments freelance.

One of the funniest movies ever made, Caddyshack, comes to hi-def Blu-ray. Centering on a young caddy trying to earn a college scholarship, the whole thing is really just an excuse for the holy trinity of Bill Murray, Chevy Chase and Rodney Dangerfield to wreak havoc on a stuffy country club.

Will Smith made the leap to movies with Bad Boys, a comedy-action flick from Michael Bay. Martin Lawrence provides the other half of the buddy cop duo.