Flight of the Conchords: May 30 @ Hollywood Bowl 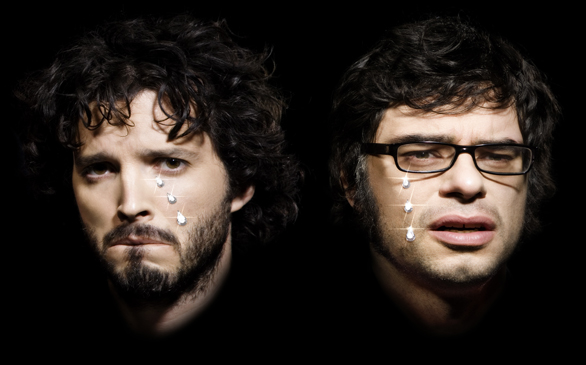 If you ask most people what they first think of when someone says, “New Zealand,” a majority would say The Lord of the Rings, sheep or “Flight of the Conchords.” Since their 2005 HBO “One Night Stand” special, the comedy duo of Jemaine Clement and Bret McKenzie have taken America by storm with their own HBO series (which lasted for two seasons), three releases via Sub Pop Records and their subsequent tour performances across the country.

The Kiwi pair took over one of Los Angeles’ most revered venues for one hilarious night along with guests from their TV program. First, Kristen Schaal (Mel on the TV show) appeared onstage dressed up as a whoopee cushion, and the hijinks just got crazier from there. Schaal shared random thoughts, such as, “If we sent a werewolf to the moon, would it be a werewolf forever?” Schaal’s mock audition for “Law & Order: SVU” involved an entire Entenmann’s chocolate cake and was both entertaining and just ... well, messy. Arj Barker (Dave from the series) and Eugene Mirman (Bret and Jemaine’s landlord on the show) also doled out funny bits before it was FOTC’s turn.

The frenetic guitar/synth and lyrical delivery of “Robots” kicked off the 22-song long set before McKenzie and Clement launched into one of their classics, “The Most Beautiful Girl (in the Room).” They performed oldies like “Albi the Racist Dragon,” “Business Time” and “Jenny,” as well as newer songs like “1353 (Woo a Lady).” During “Bowie,” they took off their shirts to reveal sequined tops. To complete the look, they removed their pants to show off skintight shiny trousers during “Demon Woman.”

The audience was blessed with accompaniment by the New Zealand Symphony Orchestra – their friend, Nigel, on the cello. Some of the greatest moments were, of course, when the two bantered in between songs. They shared that one of the best perks to being on the road is getting complimentary muffins in their hotel rooms and that McKenzie has a signature lick: just an E note. The Conchords tied up a four-song encore with an a cappella version of “Sugalumps,” complete with the duo going into the crowd and shaking their “lumps.”