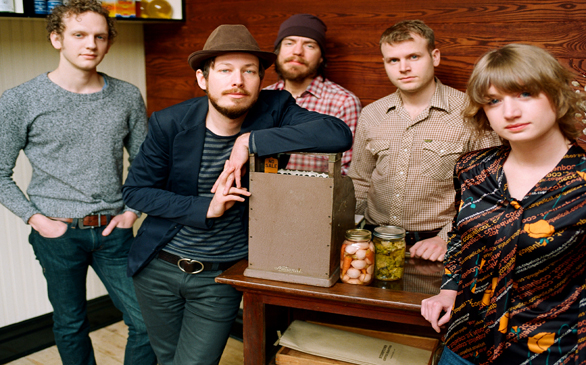 Maybe it’s because they have a song for any and every mood I could possibly be in. Maybe it’s the guitar licks and melodies that grab me by the eardrums and refuse to let go. Maybe it’s the fact that frontman Andy Cabic’s voice is a slice of heaven. Vetiver is that band for me. And the only thing better than listening to a Vetiver album while lounging at the beach is seeing them perform live.

A past Vetiver and Jenny Lewis (who was roaming about the crowd) contributor, Farmer Dave Scher, put on a rousing set that included a great Love cover to get the show rolling. After which, San Francisco-based Cabic et al took over and had the normally way too cool heads of Spaceland bopping for the remainder of the night.

The quintet stuck to songs from 2006’s To Find Me Gone (“You May Be Blue,” “Won’t Be Me”) as well as their fourth full-length, Tight Knit, released via Sub Pop last year (“Everyday,” “Strictly Rule” and an encore of crowd favorite “Sister”). But they also treated the audience to an A.R. Kane cover, “Miles Apart,” one song from their self-titled 2004 debut and a new one called “Hard to Break.”

After an exquisite rendition of “Maureen,” Cabic declared, “I’m going away for six weeks [to tour overseas as part of Devendra Banhart’s band], and my lady is sad. So, that was for her, but this next one is for you. I hope you all have a great summer.”