If you’ve ever been to a show at The Wiltern, you know the area is not exactly Beverly Hills – there aren’t many choices for fine dining or even for grabbing a quick drink before the show. Who knew that just two months ago, restaurant owner John Chung would construct an eating den that takes you on a vacation, right next door to the famed Wiltern?

Opus Bar & Grill, stationed where popular Atlas Club once stood, has some big shoes to fill. Thankfully, this place doesn’t seem to be having any problem filling – and surpassing – that position. With the ambitious idea to house two of Los Angeles’ powerhouse chefs – Executive Chef Sara Levine, of Brentwood’s Zax, and partner Mark Dao, previously of Patina – the two work together to create a stylish nouveau California cuisine, marrying seasonal ingredients with traditional Asian flavors.

Opus seems committed to not being a casualty of the restaurant race. Romantic architecture, 20-foot ceilings and a wall constructed out of wine bottles – ask wine connoisseur Sommelier Noel Baum for suggestions – not only entices your eyes, but your palette as well.

First course offerings include Black Cod with Sweet Miso Sauce and Daikon Salad ($12), and Yellowtail Hamachi and Blue Fin Tuna Sashimi with Shaved Fennel, Cilantro and Soy Chili Sauce ($15). While portions are ample-sized, one item, Maryland Crab Cakes with Lobster Bearnaise ($12), was slightly disappointing – only crab cake was served. Still, it is a rather large portion to be shared.

Salads ($8) include a blissful Fuji Apple and Beet Salad with Roquefort Cheese and Beet Vinaigrette, Arugula Salad with Fried Croutons and classically made Caesar Salad with a great anchovy flavor.

The entrees are where the dual-chef team really shines. Divided into sections, fish, meat and steak, there are plenty of choices for each but probably not enough room in your stomach for all three (though I did try!). The sweet Butter Poached Lobster ($35) is so velvety you’ll wonder how anyone can diet with such an invitation to be decadent. Ling Cod, a fish bountiful in the Alaskan Gulf, is served along crisped pork chorizo and fingerling potatoes. Fingerling potatoes are small in size and are quickly becoming one of the hottest accompaniments in fine dining restaurants.

Of special note is the farm-raised duck. It arrives with a large confit leg, peas, navel oranges and a rice dish that comes with a story. Forbidden Rice, as it was named back in the days of ancient Chinese emperors, was only to be consumed by the emperor and his court. No one else in the entire country was allowed to consume the specialty and aphrodisiac, under the penalty of death. Fitting for the sensual surroundings, the dish is a meal in itself.

Also of note is Roasted Chicken ($22) with Artichokes and a tangy brown butter caper sauce.

If steak is what you’re looking for, you’ll find it at Opus. From Petite Filet ($20) to Porterhouse ($38), you’ll have a range not often seen outside steakhouses. You can choose from four sauces to perfect your selection, such as Lobster Bearnaise or the highly recommended Brandy Peppercorn. Sides include Garlic Spinach ($6), Onion Rings ($4) or Glazed Spring Vegetables ($6).

Be sure to save room for desserts! Strawberry Trios, Watermelon Soup and the Chocolate – oh my god, the chocolate – are worth loosening the belt buckle for. Opus Bar and Grill is conveniently located next to The Wiltern Theatre and is perfect for a bite before the show or a naughty nightcap afterward.

Fine Dining
M Grill is a Meat Lover's Paradise: Bring in the Campus Circle Coupon to save 10% off your entire bill
4,706 views 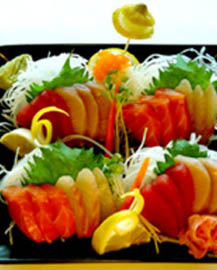 Fine Dining
Get A Life … A Night Life That Is!: Kabuki Japanese Restaurant
3,640 views