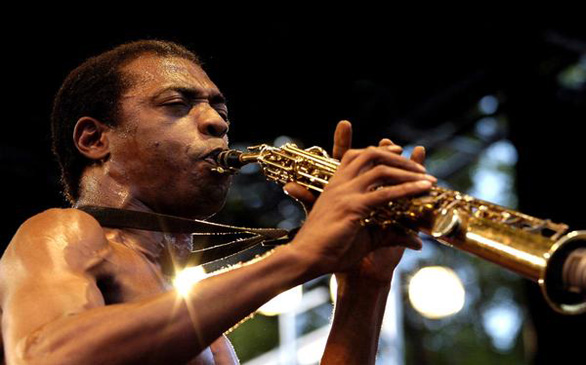 There were quite a few highlights at this installment of the Jazz at the Bowl series. For starters, jazz trumpeter and film composer Terence Blanchard (Cadillac Records, Inside Man) surrounded himself by musicians he called “the future,” the youngest being 18-year-old L.A. native Joshua Crumbly on bass. Cuban pianist Fabian Almazan’s soft and sweet solo was so sonically exquisite it quieted the chatty crowd.

After two songs, the Lula Washington Dance Theatre joined Terence Blanchard’s band for a mixture of slow and fast ensemble pieces. The movements were smokin’, but the dancers’ bodies were hotter, as they leaped, shook, kicked and pranced between the grooves and along to the voice of Cornel West, who appears on Blanchard’s latest CD, Choices.

Femi Kuti definitely exuded the most energy, jumping along to the rhythms of the Positive Force for his entire set. While his Afrobeat sounds and politically and socially conscious lyrics were uplifting, funky and inspiring, it was his dancers, or professional booty shakers, that captivated my attention and wouldn’t let go. They (almost) stole the show.

Maybe jazz has always been subtly political, or maybe it’s the time we live in, but the night’s overall messages were for hope, the pursuit of justice and activism.