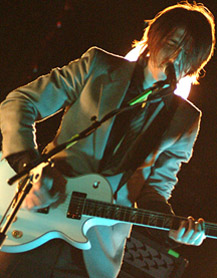 Kids were wearing business suits at the door with the Wiltern smelling of burgeoning celebrity. Behind a wall of smoke, flickering lights and camera phones, Interpol took the stage fully aware that all the buzz was – and is – endlessly theirs. Although singer Paul Banks’s occasional "Thank you," seemed to resonate louder for its indifference than its sincerity, fans didn’t seem to mind.

Alternating between songs from their latest release Antics and the masterful Turn On the Bright Lights, Interpol hid behind their shadows, adding to their ever-growing aura. "Say Hello to the Angels" and "Slow Hands" proved to be their most exuberant songs, garnering some of the loudest cheers from the sold out crowd.

"NYC" slowed it down for the sing-along, while "PDA" – undoubtedly the highlight of the evening – perfectly showcased Banks’s unpolished vocals and Interpol’s minimalist one-string guitar progressions.

Riding the success of their latest album Now Here Is Nowhere, the Dallas-via-New York trio The Secret Machines perfectly complimented the evening’s theme. Their atmospheric and elongated Pink Floyd-ish sound served as just one reason why they’ve been able to ride the latest musical wave.