Withnail & I, City Island and More 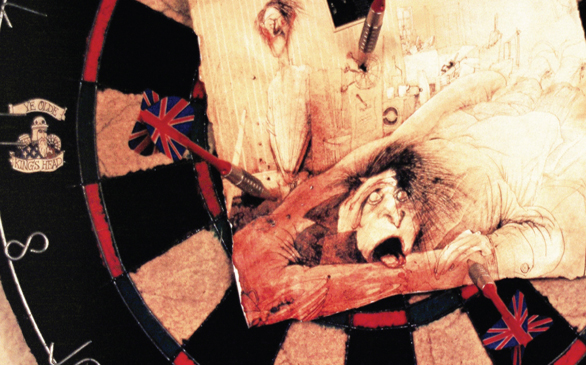 Blu Notes: Bruce Robinson’s cult classic Withnail & I comes to hi-def. The film follows two out-of-work actors as they debauch their way through a weekend in the country.

The Idiotbox: The complete adventures of New Zealand’s answer to Tenacious D are now available in Flight of the Conchords: The Complete Collection. The set includes both seasons, plus the “One Night Stand” concert special.

It’s an East Coast/West Coast rivalry as Gossip Girl: The Complete Third Season and 90210: The Second Season come to DVD. Set in Manhattan’s posh Upper East Side, “Gossip Girl” follows the scandalous trysts of the young and privileged through the eyes of the titular omniscient blogger. Hilary Duff guest stars as a Hollywood star, meanwhile Georgina returns as the cast explores post-high school life. “90210” updates the ’90s classic, with a new class of Beverly Hills High. Their junior year sees them dealing with a stalker and a drunken-driving accident.

The Simpsons: The Thirteenth Season: Still going strong, in this season Bart becomes a bubble boy, Homer opens a new bar/hunting club after Moe sells out to start a trendy new club and Lisa becomes a Buddhist. Plus, the Simpsons do Brazil and Pierce Brosnan guest stars in a 2001 parody.

Gangland: Season 5 takes you inside the street gangs that are spreading across America and into the suburbs. People on both sides of the law, including former gang members, give a riveting inside look into the epidemic of violence.

Under the Radar: The Australian film The Square is one of the best noirs in recent memory. In the same vein as Blood Simple, it’s a film where a simple plan to take some money no one will miss goes awry, precipitating disaster for everyone. It features great performances, double crosses and nerve-wracking twists.

Claire Danes stars in Temple Grandin, a biopic of the amazing autistic woman who used her affliction to help others, including inventing a hugging machine for people who don’t like to be touched and a more humane method for cattle slaughtering.

Funny Business: City Island is a quirky little family dramedy along the lines of Little Miss Sunshine. It takes place on a small island off New York and follows a family where everyone has their secrets. It’s a surprising, charming film with a great cast, including Andy Garcia, Julianna Margulies, Alan Arkin and Emily Mortimer.

Jennifer Lopez and Alex O’Loughlin star in the rom-com, The Back-up Plan. Unlucky in love, Lopez gives up and decides to visit a fertility clinic to become a single mom. But the day she is impregnated with twins she meets the man of her dreams.  Lopez makes her return to the screen with capable charm.

Stranger Than Fiction: The Age of Stupid takes a fresh approach to the documentary. Set in the future, an archivist looks back at 2008 and asks why humans avoided doing anything about global warming.

You know those amazing portraits that are made up of a grid of small designs? That’s artist Chuck Close, the subject of a new documentary Chuck Close: The Life and Work of the Man Who Reinvented Portraiture. Close elucidates his revolutionary methodology with commentary from contemporaries.